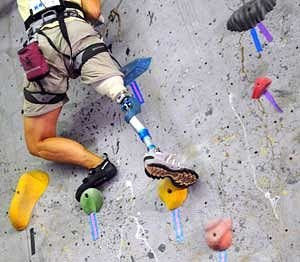 Media General News Service
Cara Fortunato, a nationally-ranked Extremity Games amputee rock climber, scales a climbing wall using her fully articulated prosthesis. Fortunato visited Tampa Friday to assist USF in conducting a study of the metabolic demands of rock climbing with unilateral transfemoral amputees. The goal of the study was to find out which condition works the best and is the most energy efficient--no prosthesis, stubby prosthesis-foot forward and foot backwards, and full articulated walking prosthesis-knee locked and knee unlocked.
By B.C. MANION Media General News Service Published: August 27, 2008
TOWN ’N COUNTRY — Coming off a recent win at the Extremity Games in Michigan, Cara Fortunato quickly scaled the 24-foot wall at Vertical Ventures. The athlete wasn’t aiming for a personal best. She was doing her bit for science. The female rock-climbing champion flew into Tampa for a day last week to help researchers figure out what kind of artificial limb works best for amputees in their quest to climb rock walls. She’s one of three nationally ranked amputee rock climbers who have volunteered in the University of South Florida research project. Each climber scaled the wall at the indoor rock-climbing gym near Tampa International Airport under five conditions. They wore a stubby leg prosthesis with a foot facing forward and one with a foot facing backward; they wore a fully articulated prosthetic leg with a knee lock and one without; and they wore no prosthesis at all. They also wore masks equipped with oxygen sensors to track how much effort each climb took. The goal was to find which condition works best, said Jason Highsmith, a visiting assistant professor at USF’s School of Physical Therapy & Rehabilitative Sciences. “We don’t know if one is easier. We know the stubby seems to be preferred by a lot of people. But a lot of people climb with no prosthesis,” Highsmith said. The value of the research extends beyond helping amputee athletes perform well, he said. Rock climbing is one of the therapies used to help wounded war veterans from Iraq and Afghanistan to resume active lives, Highsmith said. “The three major military hospitals have all invested in climbing walls,” he said. “They’re looking for lifetime fitness pursuits (to offer to injured veterans). This is something you can do as a lifetime pursuit.” The rock-climbing research is one element in a $1 million federal Department of Education demonstration project granted to USF. Other parts of the demonstration project included developing an artificial hand that kayakers can use, testing artificial knees and creating educational materials, Highsmith said. The educational materials, available free through the project’s Web site, provide practical information for people who are new to the world of prosthetics and orthotics, and to those well-versed in the topics. The site contains everything from common terms, to what acronyms mean, to what new amputees can expect, to where they can turn for funding and more information. Fortunato, who spends most of the year in Crofton, Md., and the rest in Bonita Springs, met Highsmith a few years ago and said she wanted to help him. “What they’re trying to prove and test will help a lot of climbers,” she said. Ronnie Dickson, another nationally ranked climber, also volunteered his time and skills. “We have a lot of war veterans coming back. This is one of the choice sports that some of the guys have been taking up,” Dickson said. “One of the best ways to get through rehab is to really focus on something, to find something that’s physically rewarding and challenging. This seems to be a sport that amputees can take up pretty well.”
Posted by Bernabe at 9:18 AM