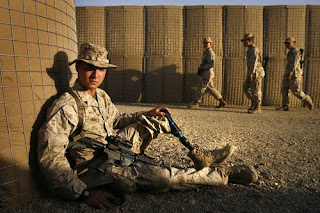 A year after Cpl. Garrett Jones lost his left leg to a bomb in Iraq, he has rejoined his unit in Afghanistan. Improved medical care and prostheses -- and his determination -- made it possible.
By David Zucchino, Los Angeles Times Staff Writer
August 6, 2008
CAMP BARBER, AFGHANISTAN --

Just over a year ago, Cpl. Garrett Jones was one of thousands of Marines slogging through a tour of duty in Iraq. Today, he is deployed with the same unit in Afghanistan, but he serves now with an unusual distinction.

Garrett with friendsDozens of insurgents killed in Afghanistan battle
U.S. prepares to boost its forces in Afghanistan
Deadly Taliban attack on U.S. bases raises concerns
On July 23, 2007, Jones was on foot patrol near the Iraqi city of Fallouja when he was injured by a roadside bomb. After the attack, his left leg was amputated above the knee. He developed infections and fevers. His weight dropped from 175 pounds to 125. At 21, Jones faced months of painful rehabilitation and a likely end to his service in the Marine Corps.

One year later, Jones is walking smoothly on a prosthetic leg. He not only continues to serve on active duty, but he has worked his way back to a war zone, serving with his Marine battle buddies in Afghanistan.

In previous wars, Jones would have received a medical discharge and returned to civilian life. But in the Iraq and Afghanistan conflicts, the Pentagon has made it possible for some amputees to return to duty -- and for a few to deploy overseas again. Advances in medical care and high-tech prostheses have enabled amputees to function far better.

Jones said he couldn't bear the thought of not deploying with close friends in his unit after he learned last fall that they would be sent to Afghanistan. He also wanted to pave a path for other amputees and show them what's possible, he said.

"I want to be someone an injured Marine can talk to," Jones said. "And I can tell them: 'Times will be rough and not always easy as an amputee, but you can still make great things out of an unfortunate situation.' That's what I want to do."

Sgt. Matthew Leonard, who served with Jones in Iraq and now works beside him at this desert base in southern Afghanistan, said Jones has earned a special status among Marines because he demanded to be sent back to combat.

"He didn't just choose to come -- he fought to come," Leonard said. "We bled and sweated with this guy in Iraq, and he wants to be with us more than anything. That's awesome."

Jones, 22, of Newberg, Ore., is among a small number of Marines who have lost a limb in Iraq or Afghanistan and returned to duty in a war zone. (A Marine Corps spokesman said the Corps is unable to provide accurate figures.)

Sixty-two soldiers, airmen or sailors have lost limbs in combat and returned to active duty, according to spokesmen for the Army, Navy and Air Force.

No information was available for the number of those amputees who have returned to duty in Iraq or Afghanistan; some estimates put the number at about a dozen.

Nearly 900 of the 33,000 total U.S. wounded in Iraq and Afghanistan have lost at least one limb, according to the Pentagon. Partly because of manpower shortages and partly to retain veterans with combat experience and other expertise, the military has cleared the way in recent years for amputees and other injured service members to remain on active duty.

Unit commanders decide after consulting military doctors what type of duties to assign amputees, either in the U.S., on an overseas base or in a war zone, said Lt. Col. George Wright, an Army spokesman.

Jones said he had to pass medical tests and prove in training that he could walk effectively, get in and out of a Humvee and perform other physical tasks. Once, while in a simulator that mimics a Humvee rolling over, his prosthesis popped off, he said. He reattached it and continued the drill.

Jones didn't get his first prosthesis until November. By the end of December, he had learned how to snowboard again, a sport he had enjoyed for years. He plans to compete in freestyle snowboarding in the 2010 Paralympics in Vancouver, Canada.

"I can do stuff on a snowboard I don't think any other amputee can do," he said. He would compete to win, which would create "good publicity for the Marine Corps," he said.

"He's amazing -- he can do anything," said Cpl. Paul Savage, who works with Jones here at the headquarters for the 2nd Battalion, 7th Marine Regiment, which is based in Twentynine Palms. "There are no limitations with this guy."

Jones looks like a lot of other Marine enlisted men on the base -- young, fit, suntanned and energetic. Except for a limp, he blends in easily. He is engaging and forthright. He discusses his injuries coolly, without a trace of self-consciousness.

"I roll with the punches," he said. "I'll always have some pain and discomfort, and I've accepted that."

For more on the story
click here.
Posted by Bernabe at 9:03 AM