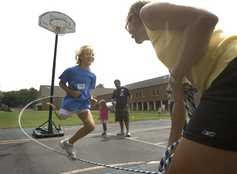 With record-setting runner as role model, foundation prompts kids to try sports
Ashley Messick, left, of Durham gets a little help from her mother, Ashley Messick, right, on a jump rope routine. Ashley, 9, finds it easier to easier to jump rope without her prosthetic leg. Staff photo by Corey Lowenstein
Story Tools

By Jay Price, Staff Writer
DURHAM -- After 9-year-old Hannah Messick took off her leg to jump rope on just one, 7-year-old Haley Harris had to try it too.
A small experiment, but exactly what organizers of a Saturday program for child amputees were trying to do: spread the idea that it's OK to try just about any physical activity despite missing limbs.
The Children's Amputee Foundation, started by the family of an elite disabled runner from Greensboro, Andrew Lester, invited area child amputees to Trinity School of Durham and Chapel Hill for a day of sports and games.
Lester, a rising senior at Campbell University who is missing his lower right leg, competes in paralympic track events around the globe and set a world record in the 1,500-meter run.
He told the 10 child amputees who came Saturday that he started running after attending a similar event featuring amputee athletes and that he wanted to do the same for them.
Two other high-achieving young leg amputees -- triathlete Kelly Bruno of Durham and UNC student and Morehead Scholar Stamp Walden of Vass -- also spoke. Bruno told the kids that she played soccer, baseball and basketball, swam, ran track and practiced martial arts before turning to triathlons. In less than two weeks, she is expected to become the first disabled ball girl at a U.S. Open tennis tournament.
The point, though, isn't necessarily to aim for high-level sports but to realize an amputation doesn't mean serious limits to physical activity, Bruno said.
"It doesn't matter what you do, just find something and pursue it," she said.
Then she, Lester and Walden helped the kids try kickball, freeze tag, basketball and foot races.
The event was as much for parents as for the young amputees. The kids often have fewer fears about trying new sports than their parents have about letting them, said Nancy Payne, limb loss clinical nurse specialist at Duke Medical Center.
"The parents will be concerned about what the kids can do and worry that they'll hurt themselves, but when you see this kind of thing," she said, gesturing at a field full of shrieking kids playing kickball, "it's a no-brainer.
"In truth, the kids can do about anything they want."
Physical activity is important for kids missing a limb for the same reasons it's important to other kids, Payne said. An amputation can lure kids into a sedentary lifestyle, especially without role models like Lester, she said.
Posted by Bernabe at 9:33 AM