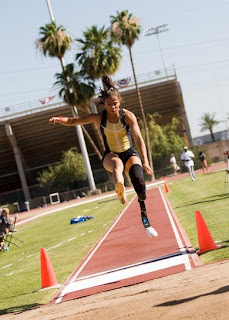 Sport: Track and Field
Residence: Somerdale, New Jersey
April Holmes went from an all-star high school and college athlete to a promising Paralympian. Best known for her deep faith and resilience, April is active in her church and uses her faith and experiences to uplift those who, like her, have acquired their disability through tragedy.
A high school 400-meter champion, Holmes later earned multiple NCAA All-American honors as a sprinter at Norfolk State University in Norfolk, VA. When she lost her leg in a train accident in 2001, she didn’t despair about her new situation.
Since her accident, April has made remarkable strides as both an athlete and advocate for individuals with disabilities. A little more than a year after her accident, April was back on the track in her debut Paralympic competition: Disabled Sport USA’s “International Challenge.” Not only did she win the 100-meters, but her time qualified her to the International Paralympic Committee’s World Championships, which were held later that summer in Lillie, France. In France, she won a silver medal in the 100m and set an American record of 14.12 seconds for her classification.


Off the track, she has created the April Holmes Foundation to further opportunities for individuals with physical and developmental disabilities.
April already has her sights set on the 2008 Paralympic Games in Beijing, China. Knowing April’s strength, stamina and resilience, she is surely an athlete whose name you will continue to hear leading up to the 2008 Paralympic Games.
Through her determination, winning spirit and accomplishments, April embodies The Hartford’s belief that the sky’s the limit when we focus on an individual’s abilities, instead of on his or her perceived physical limitations.