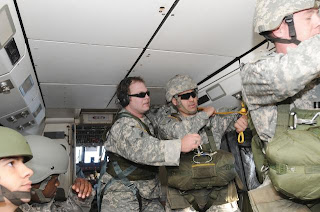 FORT BRAGG, N.C. - For most Soldiers, when they join the Army there are a set of schools they set their eyes on as goals to complete. Schools like, Air Assault, Ranger and Pathfinder. For any airborne qualified noncommissioned officer, the natural goal would be the Jumpmaster Course.

For Fairfax, this journey began the summer of 2005 in a remote region of Afghanistan when his truck was struck by an improvised explosive device.

In the attack he suffered a severe injury to his right leg, as well as injuries to his right eye and left lung. His team's medic, Sgt. 1st Class Derrick Coyme, quickly went to work to stop the massive bleeding caused by the severed femoral artery.

Just before losing consciousness Fairfax faced the realistic possibility he may not survive the attack, because of his heavy loss of blood and the team's remote location.

Fortunately, he survived, and his next memory is waking to the voice of his wife at his bedside in the Landstuhl Regional Medical Center in Germany. Fairfax knew he was not in the best condition, but felt committed to recovering from his injuries.

"It never crossed my mind that I wouldn't get back to a team," said Farifax. "My only goal was to get better and continue on with business as usual."

Initially, Fairfax still had his right leg, through several surgeries and battles with infection, doctors were able to save it and he began the long road of rehabilitation.

December of that same year, Fairfax returned to the group and his leadership gave him one mission: "go get better."

By June 2006 Fairfax was back to work, but spent over a year struggling with the pain of the injured leg. After several surgeries to repair the leg to make it more functional and reduce the pain had failed, a friend and fellow amputee joked that he should just cut the leg off.

Fairfax gave the option serious consideration. After consulting several doctors and amputee Soldiers, he decided to go through with the amputation.

A year prior to the day of his graduation from the Jumpmaster Course, he had the operation to remove his right leg. The next year would be spent dealing with a cycle of rehabilitation and methicillin-resistant Staphylococcus aureus infections.

Each time the MRSA would come back he was forced to remain off the prosthetic.

Once healed, he would have to rebuild the muscle strength to walk in the socket again. When it was time for the Jumpmaster Course, it had only been three weeks since his last bout with a MRSA infection and his return to using the prosthetic leg.

"Only being in the socket three weeks really increased the physical demand," said Fairfax. "It takes time to build up the hip flexors and other muscles. I was pretty sore each night during the course."

The majority of the course focuses on the jumpmaster personnel inspection. The sequence requires the jumpmaster to squat or bend down to visually inspect the jumper's equipment. Most jumpmasters will go into a deep squat during this portion as, going to a knee will take more time to get up and continuing the inspection.

During the final test students are required to properly inspect three jumpers and in five minutes find all deficiencies and conduct the inspection in the exact inspection sequence. For Fairfax his only option was to drop to a knee.

"It wasn't until our first rotation in the (JMPI) circle and he dropped down on the concrete slab. It made such a loud sound all the guys turned and looked. The crack was so loud it sounded like rounds were dropping in. One guy asked him 'did that hurt' and he responded, "no, I don't have a knee."

Though disadvantaged, there were no changes made to the course's standards. The jumpmaster is typically one of the U.S. Army's more challenging schools; the standards for success are purposefully strict. A typical course will see a 50 percent pass/fail rate.

"Before the start of the course I told myself, failure is not an option," said Fairfax. "I knew I would be paving the way for other amputees to go through the course and I didn't want this to be something they couldn't do." Not only did his success provide fellow amputees with inspiration, but fellow Green Berets as well.

"The majority of the guys and all of the instructors were impressed," said West. "Most were saying to ourselves, 'holy smokes, would I be able to do that?' To do what he did with a prosthetic leg is a very real inspiration. These are the kind of guys you want in SF. The guys who are going to find a way to get things done, no matter what the circumstances are they will accomplish the task."

West added that this is the kind of Soldier Fairfax has always been. "When you wear an SF tab, you hold yourself to a higher standard," said Fairfax. "If this can give another guy a glimmer of hope, then that's a good thing. Sometimes you need someone to look up to ... someone to look to when you're down."

Fairfax expressed gratitude toward his command for supporting him through his recovery and providing him a way to still be a contributing member of the group.

"It has always been one of my goals," said Fairfax. "If I can't be on a team, at least I can be a productive Soldier in the group." Just as any good Soldier does, Fairfax has set his eye on more training and goals for the future. "I don't want this to be the last thing I do," he concluded.
Posted by Bernabe at 10:25 AM