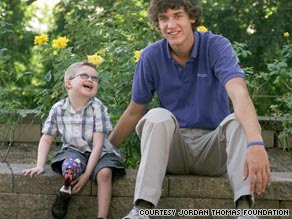 But when he jumped into the water, the boat's wake dragged Thomas hard into sharp, whirling propellers.

He immediately knew what was about to happen.

"I looked down -- my black fins were gone, and all I saw was red just everywhere," said Thomas, an athletic teen who was captain of his high school's golf team. "But I had this unbelievable calmness over my body."

His father and mother, both doctors from Chattanooga, Tennessee, jumped into action.

"All of a sudden, my 16-year old, happy-go-lucky captain of the golf team was potentially dying," said Dr. Liz Kennedy-Thomas. Watch Thomas tell his story »

She worked to stanch the blood flow from her son's legs while his father rushed the boat to shore and fetched paramedics.

Thomas was rushed to a hospital, where he spent the next two weeks undergoing several surgeries on what was left of his legs and, along the way, discovering what would become his life's work.

While there, Thomas visited other amputees.

"I just remember seeing so many kids who didn't have parents, didn't have health care," he said. "I just knew that the future was grim for them."

Don't Miss
Get involved: The Jordan Thomas Foundation
Amputee Coalition of America
In Depth: CNN Heroes
Impact Your World
See how you can make a difference
The top-of-the-line prosthetics Thomas was fitted with -- the ones that helped him return to the golf links -- cost about $24,000. He learned that many insurance plans cover only about $5,000.

That's especially tough on child amputees, who will outgrow several limbs before adulthood.

"I had no clue," he said. "It's one of those things, unless you're affected by it, you just don't know."

Thomas knew he was lucky. With a financially stable family, he'll always be able to afford good legs. He asked his family to give a donation to help others, but ultimately, with their support, the teenager launched a fundraising foundation to provide life-changing prosthetics to children in need.

The Jordan Thomas Foundation has raised more than $400,000 through bracelets, charity golf tournaments and cookouts. Some of that is paying for ongoing prosthetics for three children until they reach age 18.

One of them is Noah Parton.

The precocious 6-year-old was born with a congenital heart defect and had a complication with a tube inserted in his right leg, leading to an amputation above his knee.

His family's insurance would pay only for a "stubby," a wooden artificial leg without a bendable knee.

"His first bendable knee ... didn't have a certain number or something that would apply, and they refused to pay for it," said Noah's mother, Nancy Parton, who lives with her son about an hour north of Chattanooga, in Evensville, Tennessee.

Noah couldn't run and play with other children. And even day-to-day activities were tough.

"It was hard to put him in the car because his leg stuck out straight. And I'd have my seat up as far as it would go, and it would still hit the back of the seat," she said.

Thomas' foundation stepped in, buying Noah several knee devices -- a new one for each new leg he needs as he grows -- and a foot.

"He's so proud to show off how his knee bends," Thomas said. "And his foot has a split toe so he can wear sandals like his parents." Watch Noah show off his bendable knee prosthetic to Thomas »

"He loves to climb stairs now; he tries to ride bicycles," she said. "You name it, he does it.

"Take him to the park [with] any other kid; he'll just blow you away."

While Thomas says his foundation still has a "mom-and-pop" feel, they plan to continue growing to help more children in need.

"If we provide them with prosthetics," said Thomas, "then that creates a whole gambit of opportunity for them to achieve whatever they want ... and I think they deserve that."

As Congress debates overhauling the nation's health care system, prosthetics are quietly getting some attention.

In May, Rep. Robert Andrews, a New Jersey Democrat, introduced the Prosthetic and Custom Orthotic Parity Act, which would require insurance companies to cover prosthetics at the same rate they do surgery.

"It's pretty simple," Andrews said. "Prosthetic devices are not cosmetic. You can't walk without one or you can't lift something without one, and I think one of the reasons people are so upset about the health care system in this country is they had hassles like this."

Seventeen states have passed similar laws, most recently Missouri. But amputee advocates say there needs to be a national law.

According to the Amputee Coalition of America, there are nearly 2 million amputees in the United States, and at least 25,000 of them are children.

Kendra Calhoun, president and CEO of the coalition, said that with more sweeping health care legislation taking all the attention, "our biggest hurdle [for a prosthetics law] right now is being heard."

Some insurance companies have said that premiums would go up for everyone if they were forced to cover prosthetics to the extent advocates want.

Advocates cite a study that they say shows it would cost beneficiaries about five cents per month.

Meanwhile, Thomas, a full-time college student in Charleston, South Carolina, spent the summer at home in Chattanooga working at a prosthetics and orthotics company.

Thomas has no plans to slow down. He says he would like to become a voice for the amputee community and help many more children live "normal and happy, productive lives."


"When you're thrown into the situation, you just kind of adapt and you make the best of it," Thomas said. "There's nothing that I really cannot do."

Want to get involved? Check out the Jordan Thomas Foundation and see how to help.
E-mail to a friend
Share this on:
Mixx
Facebook

CNN's Allie Brown and Doug Gross contributed to this report.
Posted by Bernabe at 10:53 AM

All stories I find relate to persons who have reasonable stumps to which the prostheses can be attached. Is anything available for people with amputations at groin level? Neville.