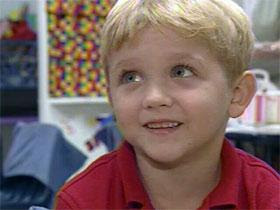 It was five years ago when Eyewitness News met Zachary Smith at Children's Hospital, just a few months shy of his first birthday – his parents were then faced with a critical decision. To save Zachary’s life, both his arms and both legs had to be amputated.

“(Doctors) said it was hour to hour, and if he would pull through the first 48 to 72 hours, his chances were better,” said Heidi Smith, Zachary’s mother.

Zachary’s lungs and kidneys had failed, his heart was beginning to do the same and his liver showed signs of problems as well.


“Zach was as sick an infant as I've ever treated in the now more than about 20 years that I've been at (Children’s Hospital) doing this,” said Dr. Judith Harris, a pediatric pulmonologist at LSU Health Sciences Center.


The problem was that staph bacteria, the kind that are resistant to antibiotics. It's normal for any of us to be exposed to staph bacteria on a daily basis, but an infant's immune system is just too week to fight it.

Zachary's limbs had to be amputated when he developed life-threatening staph infection.

And now, Zachary just celebrated his sixth birthday, a thriving kindergartner at Bourg Elementary in Terrebonne Parish. His teachers have said he’s a remarkable child.


“I have been teaching 33 years and I have never met a child as inspirational as this child – ever,” said Yvonne White, a teacher at Bourg. “Yesterday afternoon I asked the children who was going to help me clean the floor. He was the first one up, picked up all the trash off the floor; just incredible.”


Zachary’s motto has been, ‘I can do anything.’ He’d rather not get any help from adults or classmates.


It’s an attitude—part of Zachary’s character—his parents have worked hard to develop.


“It's just tough love that’s the only thing you can do to make sure he's going to be independent…and sometimes it's hard. Sometimes you want to do stuff for him,” said Eric Smith, Zachary’s father.


On Wednesday, Zachary got the ultimate ride to school as part of the “Grant-A-Wish” program from the Louisiana State Police Troop C. He and his dad were taken to school in a helicopter.


Students at Bourg Elementary were waiting on campus for Zachary’s celebrity-style arrival.


“There was not a dry eye for any teacher here, it was such a wonderful thing,” said Mary Justice, Bourg Elementary Principal. 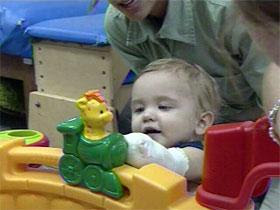 Zachary has developed an "I can do it" mentality during his short life.

Zachary admitted to being scarred at first when the helicopter took off, but said later, “It was just like a big plane.”


Now a family of five, Heidi remembers a time when they grieved the loss of Zachary's limbs, but were ever so grateful for the life that doctors saved.


And when she and her husband look at this productive, strong-willed, highly motivated and intelligent person, they said the fears they once had for his future disappear.


“He’s a blessing, he's an inspiration,” his mother said. “He makes you thankful for the simple things that we take for granted. Even though he can do them all, he has to put forth more effort to do them.”


The Troop C “Grant-A-Wish” program surprised the Smith family with another gift: they’re sending them to Disney World over the holidays.
Posted by Bernabe at 1:42 PM