Yes, God, I Can! By Bonnie St. John Deane 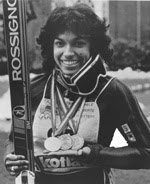 During my growing-up years, I lived my life in a mental landscape that I created for myself. In my imagination, I was a strong and graceful runner. I was beautiful and popular, and I could be anything that I wanted to be.

In reality, I had been born with a stunted right leg. My left leg was fully developed and continued to grow, but my right leg was extremely underdeveloped and short. I was unable to walk normally until I was six years old-after I had had surgeries to stiffen my knee so that it wouldn't bend and to remove my right foot so that I could be fitted with an artificial leg.

Living in my imaginary world, I was able to control my thoughts and feelings while I was awake, but during the nights in the hospital, I would scream out in my sleep. A nurse would come to wake me from the nightmares so I could go back to sleep.

Much later in life, I understood what had caused the nightmares. It was only after my stepfather died when I was eighteen that I allowed myself to remember he had molested me. Feeling so much emotional pain and trauma during my early years, I had stuffed the memories of abuse into the darkest corners of my mind.

I escaped the pain through reading and through living in my imagination. I read books at night after everybody else was asleep. I shut myself in the bathroom, turned on the light, and read on the floor. I read in the car and on the playground while other kids jumped rope and played kickball.

Then when I was eight years old, my mother gave me a brochure. On the cover was a silhouette of an amputee skier with this headline: "If I can do this, I can do anything!" I put the brochure away in a box where I kept a lock of my dog's hair and a rock from the Grand Canyon. I didn't realize it then, but the amputee pictured on the cover was showing me what I would someday be able to do.

In junior high school, I didn't feel popular or attractive. I wasn't good in sports, and I was always the last person picked when teams were chosen. The prayer chapel in the Episcopal school I attended became my sanctuary.

I was around fifteen when a friend invited me to go skiing with her and her family. She was kind and upbeat, never questioning that her one-legged friend could ski. This friend changed my life.

Living in the Real World

Resolving to step out of the mental landscape I was creating with my imagination, I began to live in the real world. I wanted to ski! When I first started, I lacked balance and strength, so I leaned over my heavy outrigger-style ski poles. I tried to race using regular poles, but I kept falling. Finally, I threw aside my ski poles, went to the "bunny," or beginners', hill, and learned how to ski with nothing in my hands.

Learning how to ski with just one ski and no poles, I gained a tremendous amount of strength and balance. Then I was able to ski with poles, planting them in the snow so that I could pop up into the air and twist. This was a very exhilarating, free way to ski. In competition, I had to use outriggers, but I learned that they were not a crutch; they were an incredible tool that helped me go all the way to the Olympics and win.

The joy and passion I felt while training for the Olympics helped me discover my spiritual strengths too. At times, I had felt as if I was using prayer as a crutch. Then as I began to reach out more and more to God, I understood that while prayer is an incredible tool that had helped me heal, I had some work of my own to do. Just as I had had to learn to work with the outriggers instead of leaning on them, I had to learn to work with divine power instead of leaning on God.

Releasing the Past to God

I have a wonderful husband now and a precious daughter, but when she turned four-the same age I was when I was molested-many painful memories came back to haunt me. There were times when I felt so down that all I could do was sit and cry. The love I felt from knowing the presence of God is the only thing that pulled me back up.

I could have let those destructive memories and the emotions ruin my family and me, but I began to release them. I went to God in prayer, and God strengthened me so that I could heal.

I am making progress in my recovery, but I still have a way to go. The memories I have experienced in the last couple of years have been more difficult than anything else I have ever had to face. Through turning to God, I am strong enough not only to face those memories but also to overcome them. And I know that because I can do that, I can do anything.

At sixteen, Bonnie St. John Deane was a young girl with one leg and big dreams. Within five years, she became an Olympic skiing medalist, a Harvard honors graduate, and a Rhodes scholar. Bonnie has worked on Wall Street, in Europe, and in Asia, and she has been an award-winning sales representative for IBM. A writer, speaker, and president of SJD&Co., she also serves as a national spokesperson for Disabled Sports USA. Bonnie has been featured by NBC Nightly News as one of the five most inspiring women in the nation. She currently resides in San Diego with her daughter and husband.
Posted by Bernabe at 10:16 AM