Amputee wants one last surf before he goes

Mohammad Malek sat in a bush, bleeding, waiting for help.

While riding his bike home from his job at a bakery, Malek, then 16, had stopped to wander off the road to gather twigs so his family could make a fire.

But there'd been a sudden explosion, and his lower right leg had been torn from his body.

"I was looking for someone to come help me for 15 minutes," he recalls. "Nobody come."

So, unsure if help would arrive, he tried to hop his way to safety.

But he hit another landmine. And his lower left leg was blown off too.

Soon, he was spotted by a group of Afghan soldiers. Scared that the area was littered with landmines, they threw him a branch.

Shrapnel laced his hands. His only option was to bite down and hold on with his teeth.

Malek, sitting recently on the sand in Seal Beach, recalls his thoughts as the soldiers dragged his legless body out of the minefield: 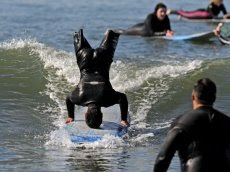 In 2005, the year he was hurt, Malek couldn't get the treatment he needed in his home country, Afghanistan.

So Loma Linda University – which has a sister hospital in Kabul – offered him help at their hospital.

Malek says the offer made him feel lucky – and scared.

"You're Muslim," his friends told him. "They're Christian."

"I heard only bad. 'Oh, maybe they kill me'," he remembers thinking as he flew into LAX.

But what he found was something different from he expected.

He met friends, lots of them. He got a girlfriend. He learned how to swim, and got so good at it that he entered competitions. He learned to love basketball and volleyball. He regularly eats pizza and spaghetti, which he says he can't get at home.

And he discovered surfing.

Malek's first glimpse of surfing came last year, during a beach outing in Los Angeles. He was on a pier, still in a wheelchair, and he pushed himself close to the rail to get a better look as the surfers below paddled into waves.

So, last April, a surf lesson was arranged for Malek.

That day, everyone on the sand was nervous — even Pless — who had never taught a double amputee how to surf. Communication wasn't easy.

Still, if there's such a thing as a natural surfer, Malek was it. He learned how to paddle and how to read the ocean. He learned to get his board on the face of the wave and, even without legs, when to get up.

He shocked spectators that day by riding wave after wave – on his head.

That was nearly a year ago. Now, Malek's treatment in the U.S. is finished. On Wednesday, March 25, he's slated to head home.

He had a final request before leaving America -- to surf.

And that's why Malek is back at Seal Beach; watching, anticipating.

"Wow," he says, pointing at the incoming waves. "Look at that."

His friend Paul Uyeda, 33, has come along to snap photos that Malek can take home. He isn't surprised that Malek wants another wave.

"He has no fear with any kind of sport."

Malek has picked up surfer lingo. He says things like "hey dude" and "awesome" and "chillax." And, when Malek and Uyeda pose for pictures, they flash a shaka "hang ten" sign. Malek even flexes his sturdy muscles.

A lot has changed since Malek's first surf session.

He has prosthetic legs, which he uses to walk on the sand. He also speaks English as if he's been here for years, so he no longer needs an interpreter. And he refuses the life jacket he used a year ago, confident he's a strong enough swimmer to take on crashing waves.

But one thing hasn't changed – Malek is still a natural.

As he paddles out, Malek plows head on into the waves, so they don't knock him over or back. Pless tries to follow behind.

Then, within seconds of getting in the surf zone, Malek is paddling into his first wave. It knocks him down, and he tumbles in the whitewash. But, without hesitation, he starts to paddle back out.

It doesn't take long before he's breaking out his signature move – the headstand – with nearby surfers cheering. He throws his arms up in victory for cameras snapping his photo.

Uyeda grabs his surfboard to join in. Soon, the competitive Malek comes out.

"Let's go, let's go," Malek yells as he paddles alongside Uyeda, beating his friend in a quick game of who-can-paddle-faster.

For more than two hours, Malek takes wave after wave.

Micheal Pless Jr. – helping a group of new surfing students nearby – calls out to Malek after he catches a wave.

"It was good, dude," he responds as he passes, his eyes focused on the horizon as he searches for more waves.

Back home, in Kabul – where his parents, five brothers and three sisters live – the only water they get is during heavy rains, when enough falls to form a flat lake, Malek says.

While he's excited to see friends and family, there's a lot he'll miss here – like his girlfriend.

She cried when he announced he was going home. "I told her, 'It's OK, we'll talk on Skype.' I love her."

Educational opportunities in Afghanistan are limited. But Malek plans to finish two years of high school, then return to the United States for college. Perhaps, he says, he'll become a doctor and help people like himself.

"I enjoy every second with United States. I like to stay here. I will come back soon."

Another perk of coming back: "I can surf a lot."

And he has something to brag about to his friends at home.

"I'm much better. Last year, I was very bad," he says of his surfing, as he takes a quick break on the sand. "I like surfing. I like to go back and surf again."

And with that, he paddles back into the surf, to catch a few more waves.
Posted by Bernabe at 3:12 PM