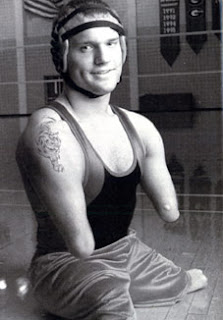 Promoted to the front page from the FanPosts by Luke Thomas. Two years or so ago this issue of Maynard fighting MMA caused heated debate within the community about whether a) Maynard had a right to compete and b) right or not, whether it was safe for him or fair for his opposition. I'd be curious to see where sentiments are today.

Courtesy of MMAfighting via Deadspin comes the tale of an armless, legless phenom whose about to enter the cage:

The amateur fight will happen at "Auburn Fight Night" at the Auburn Covered Center.

The 22-year-old Maynard in 2004 won the ESPN ESPY award Best Athlete With A Disability.

Maynard was previously denied a license to fight MMA by the Georgia Athletic & Entertainment Commission.

YouTube of him wrestling from Larry King Live after the jump. He cites Randy Couture as an inspiration: