They're trained for war . . . and Wall Street 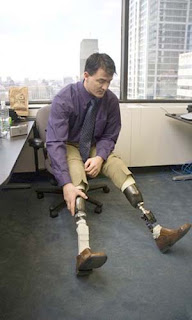 John Jones, who lost both legs in Iraq, is enrolled in a six-month brokerage course at Drexel Hamilton in Philadelphia. “The Marine Corps is just a big business with toys. I operated and managed 65 people,” he said. “If you can do that, there’s nothing you can’t do in a corporation.”

A Philadelphia firm prepares wounded veterans to become securities brokers. After all, anyone who's excelled in combat can surely brave the high-pressure world of finance -- even in these tough times.
By David Zucchino
March 14, 2009
Reporting from Philadelphia -- If you didn't know John Jones, you'd assume he was just another overworked securities trader, hustling across the sidewalk to wolf down a quick lunch in this city's financial district.

But when Jones sits down, his recent past is on full display. Titanium shins poke out from the cuffs of his dress slacks, revealing prosthetic legs. Jones was a Marine staff sergeant in Iraq in 2005 when a land mine blew off both legs below the knees.

Now he spends his days hunched over a desk, taking a crash course to become a licensed securities broker. Jones doesn't have a college education or a finance background, but he does have a wealth of experience as a leader and decision-maker in highly stressful situations.

At one point, his post-combat future came down to competing for a role as a wounded veteran on the soap opera "All My Children" -- he lost the final audition to a friend -- or braving the current Wall Street image of greed and recklessness to become a broker.

"It all boils down to morals: Do the right thing, keep your integrity intact," Jones said of his intention to join an industry blamed by many Americans for helping trigger the nation's economic collapse.


Jones and a fellow soldier, Army Master Sgt. George Holmes, are the first two students in a six-month course designed to train seriously injured veterans for finance industry jobs. The Philadelphia brokerage firm that runs the program was founded by a wounded Vietnam veteran who believes that anyone who excels in combat can flourish in the high-pressure world of Wall Street.

The timing may not seem opportune: The financial sector is in meltdown, the stock market is volatile, layoffs are rampant, and the public backlash against Wall Street is fierce and unsparing.

So why bring wounded veterans into this cauldron?

"These are the guys who sacrificed to keep us free. If you don't trust them, you don't trust anybody," said Lawrence Doll, the disabled Vietnam veteran who started the Drexel Hamilton brokerage.

The firm's program prepares wounded veterans for the two grueling exams required to become licensed securities brokers. If the veterans pass, they are guaranteed a job -- either with Doll's firm or another brokerage company -- buying and trading securities. The program pays for living, travel and instruction expenses, at a cost of roughly $19,000 per veteran.

Jones and Holmes, who beat out 15 others for the first two slots, are immersed daily in the ways of Wall Street. Most classes are held at Drexel Hamilton's 14th-floor office in a Philadelphia skyscraper, with weeklong field trips to the New York Stock Exchange, Goldman Sachs, the Chicago Board of Options Exchange and other places.

The two were honored Sunday at a securities conference at the University of Pennsylvania's Wharton School, where they were seated at dinner with T. Boone Pickens, the Texas billionaire financier. Pickens offered both men jobs.

Drexel Hamilton is dominated by brokers who serve in the Pennsylvania National Guard. They use terms like "boots on the ground" to describe field trips and "basic training" to describe the course.

"Guys with MBAs from the Ivy League can only wish they had the kind of in-depth training these two guys are getting," said Harry J. Gobora III, a retired National Guardsman and the firm's chief operating officer.

Holmes, 37, has an MBA and worked as a credit analyst for a bank and a credit-rating agency while also serving in the National Guard. He volunteered for tours in Iraq and Afghanistan, where he was badly wounded in a rocket attack in 2008.

Two soldiers next to him were killed, he said. His femoral artery gushed blood "like a fountain" before he clamped down on it with his hand. His arm bones were shattered, his eardrums perforated, his leg ripped open and his neck torn by shrapnel. Scars dot his neck.

After at least 10 surgeries on his right arm, Holmes is still learning to grasp items. He shakes hands and types with his left hand. He sometimes has to strain to hear phone conversations and instructor's comments. He has occasional memory lapses that he suspects were caused by the rocket blast.

When he first heard about the training program, Holmes "was in the hospital bed thinking, well, I'm wounded. I don't have a job," he said. "If I go back to banking, read the headlines: Thousands of people in banking looking for jobs. So I was in a tough spot."

After seven years away from finance, Holmes slowly is mastering the intricacies of Wall Street trading. Despite the current unsavory reputation of bankers and traders, Holmes said, he wants to apply the professionalism and leadership he learned in the Army to his new field.

"In the military, there's a code you live by, and that can translate to the civilian world," he said.

click here for continued story
Posted by Bernabe at 9:09 AM