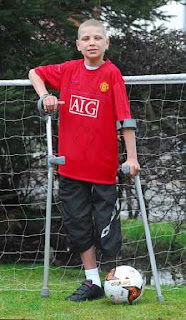 
A YOUNG footballer whose leg was amputated after he was struck down by cancer is now walking again.

Jamie Tregaskiss, 14, has finished chemotherapy and latest scans revealed he has beaten the disease

And he’s now trying out his new leg.

The youngster, who was on the books of Manchester City, faced a fight for life last year after being diagnosed with osteosarcoma, an aggressive bone cancer.

Doctors had to take the decision to remove his left leg at the hip to stop a tumour in his pelvis spreading.

After nine months of treatment, Jamie and mum Mandy, 38, have been told all trace of the cancer has gone.

The teenager has now been fitted with a prosthetic limb and is learning to walk once again.

Mandy, of Polruan Walk, Hattersley said: "It’s the news we had our fingers crossed for. The way he has coped with it is astonishing. To go through so much at such a young age must be difficult, but it hasn’t changed him one bit.

"We have to be thankful it’s not taken his life and only his leg. He doesn’t want people to treat him any differently and couldn’t wait to get back to school. He really is an inspiration."

Jamie played for Hattersley FC, City and Alder School but began suffering with pain in his left hip after a playground fall last year.

An initial scan and X-ray revealed nothing. But in April he began to rapidly lose weight and suffer from fatigue. He was referred to Tameside Hospital for a CT scan which showed up a shadow on his pelvis, and a biopsy revealed it was cancer.

But with the gruelling treatment now at an end, his hair is beginning to grow back and he has put on weight.

And he can’t wait to be back out on the football pitch with an offer to join Manchester United FC amputees team when he reaches 16.

Jamie said: "I’m determined to play again. I have to learn to walk using my stomach muscles to move my new leg, but it’s going good."

Mum-of-four Mandy was touched by the amount of people who held fund-raisers to help send Jamie on a dream trip to Florida.

She added: "Thank you to everyone who sent cheques, especially Hattersley FC who held a series of events. We will take him in summertime."
Posted by Bernabe at 11:45 AM