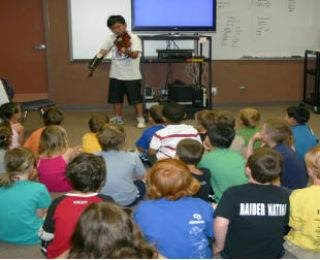 Nine-year-old Lewis Jeon has only been playing violin since January, but he wowed his schoolmates Thursday when he performed a few songs for them.

Jeon, who is in Grade 4 at Valley View Elementary School, was born without his right hand, and he uses a myoelectric arm to hold the bow.

He played the violin as part of his War Amps CHAMP presentation at the school, showing other students although he is missing a hand, he can do all kinds of things.

Jeon is a member of the War Amps Child Amputee Program (CHAMP), and he spread the War Amps’ PLAYSAFE message, as he spoke about spotting dangers and about living with a missing limb.

“Amputees can do anything,” he said.

“Sometimes it’s hard for people to know what it’s like to live without an arm or leg,” he said. “People don’t know what to say. For me, it’s OK to ask questions like ‘what happened to your hand?’ but it’s not OK to say I can’t play this game with you because I don’t have a hand or whispering or pointing or calling me ‘armee.”

Jeon showed video clips about playing and driving safely, about spotting dangers and about other Champs and everything they can do.

He urged students to be careful and to stay away from dangers such as power lines, trains and machinery.

writer@comoxvalleyrecord.com
Posted by Bernabe at 10:32 AM