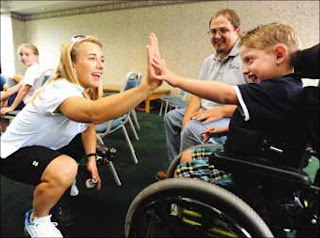 Sarah Reinertsen is in Joplin for the Boomtown Days Half-Marathon and 5K Fun Run, but the 34-year-old from California is no ordinary athlete.

She is the first person with a prosthetic leg to finish the Hawaii Ironman Triathlon, a race she completed in 2005. That event includes a 2.4-mile swim, a 112-mile bike ride and a 26.2-mile run — all in one day.

Reinertsen brought her message — “Believe in yourself and believe in the possibility that lies ahead of you” — to children and their families at the Freeman East Pediatric Therapy and Development Clinic on Friday morning.

She was born with proximal femoral focal deficiency, a birth defect that led to her leg being amputated at age 7.

“When I left the hospital, they told me I would never be able to run,” she told the children and others at Freeman.

Reinertsen said that she was determined to learn how to run. And she did. Then she said she found out about the Ironman.

“I saw it and thought, ‘Those people are crazy! I want to do that.’ I believed that I could do it.”

Reinertsen passed around her prosthetic leg, a C-shaped “foot” based on the hind leg of a cheetah, for all the children to examine. She explained the different types of legs she has and answered questions from the audience.

Emma and Ella Leach, ages 7 and 6, were among those in attendance.

“It’s just really cool that she was the first woman to do the Ironman with an artificial leg,” said Ella.

Freeman and Reinertsen surprised the children with Sarah Bears — Teddy bears modeled after Reinertsen, complete with a prosthetic leg.

“I like that the bear has an artificial leg,” said Emma.

Reinertsen autographed the bears and was able to talk with the children one-on-one.

“This is my favorite part, talking with kids,” she said. “It’s hard growing up different. I hope they can look at me and think, ‘Maybe I can find a possibility for me, too.’ They just want to know that they can have a normal life.”

She told the children that she remembers being scared and embarrassed because she was different and people stared at her.

Audie Dennis, who organized the Boomtown Days runs, said he asked Reinertsen to come at the suggestion of Bart Yasso, another Ironman competitor who also is in Joplin for the race.

Dennis said he had watched Reinertsen finish the Ironman and had been moved by her story and accomplishments.

Unfortunately, Reinertsen will be unable to participate in the Boomtown run today because of a stress fracture she suffered about three weeks ago. Though she won’t be running, she told everyone she would be there cheering for them.