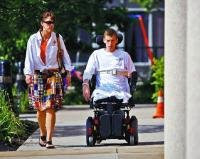 By all rights, flesh-eating bacteria should have killed Blake Haxton. He and his family credit God, the Upper Arlington community, his doctors and his strong rower's body for helping to pull him through.

Almost three months after his right calf started hurting, after countless prayers, after nearly 20 surgeries and fear that he wouldn't make it, Blake Haxton sat tall in his wheelchair on Tuesday.

He's thinner than in his senior picture, taken when he was in peak physical form, when many considered him the best high-school rower in the state. A sheet was wrapped around his lap on Tuesday and gauze around his right arm. His Upper Arlington Crew shirt hung off him.

What, he was asked, was the most difficult thing he had to overcome during all of this? 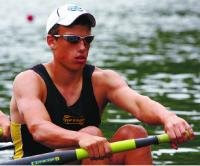 His friends and family make this point: He's still Blake. He still can crack a joke, even if his voice is a little strained from the tubes that helped keep him alive. He still wants the best from life, even if sitting upright for an hour exhausts him for now.

He believes in himself, his abilities and his own body, even if it's not quite the same body he used to have. He believes that God has seen him through.

Almost anyone else with the same infection would have died, Blake's doctor said. But Blake is not just anyone. Blake has a mother and father who taught him inner strength. He has teammates who love him, dozens of medical staffers trying to save him, a church that prays for God to help him and -- when news of his condition got out -- prayers from thousands of others around the world.

On Saturday evening, March 14, Blake did his usual -- he helped a team win.

In the semifinals of an Upper Arlington recreational basketball league tournament, he hit two free throws that sent the game into overtime. His team pulled out the victory and was scheduled to play in the finals on Sunday.

That night, he told his friend Mike Caligiuri that he thought he had pulled his calf muscle. Blake was never much of a complainer.

Blake limped down the stairs the next morning. He couldn't play in the finals, he decided. By late afternoon, his father could see the pain on his face. His calf looked swollen. Blake took Tylenol PM and went to bed.

His mother had already taken his 12-year-old sister, Haley, to school and returned home on Monday morning when he told her he thought he needed to see his doctor. At the appointment, the doctor told him to go to the emergency room.

Click here for more on this amazing story!
Posted by Bernabe at 9:55 AM