An inspiration for everyone to become pioneers 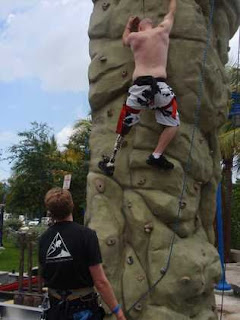 By LINDA ROBERTSON
lrobertson@MiamiHerald.com
Scott Duncan, blind since birth, is sailing around the world on his 39-foot boat, Starship.

Jesse Billauer, paralyzed in a surfing accident, is still surfing the waves off Malibu.

Carlos Moleda, a former Navy SEAL who was shot in the spine, competes in triathlons.

Anywhere you turn at the No Barriers Festival, which concludes Sunday at the Shake-A-Leg complex in Coconut Grove, you likely are to meet a remarkable athlete. Their ingenious and courageous accomplishments make the feats of able-bodied superstars seem pedestrian by comparison.

The festival showcases the latest in technology, medical research and can-do spirit through symposiums such as ''Vision Substitution in the Blind by Means of Tactile Stimulation of the Tongue'' and clinics that teach swimming, kayaking, golf, handcycling and wheelchair fencing.

''This festival should inspire all of us to become pioneers, to think about designing our own solutions to roadblocks which stand in the way of us accomplishing our dreams,'' said chairman Erik Weihenmayer, the only blind person to stand on the top of the Seven Summits -- including Mt. Everest.

Gape at a Dwyane Wade dunk, but then think about what Duncan is doing. Duncan and his first mate, Pamela Habek, are attempting to become the first legally blind sailors to circumnavigate the globe without assistance.

They are halfway there, logging 17,000 miles and stopping in 15 countries so far. Duncan's boat is in Australia, undergoing repairs and awaiting the end of cyclone season.

Duncan, 42, was born with congenital calaboma and has no vision in his right eye and 5 percent in his left. But in the middle of the ocean -- and especially in the middle of the night -- he's at no disadvantage to a sighted person. Water is the great equalizer, not only in sailing but in many other sports.

''People ask, `How do you do that? Aren't you going to kill yourself? What if you get rammed by a cruise ship?''' Duncan said while preparing to give a clinic on Biscayne Bay.

He does it using his sense of adventure, sailing skills, a heightened feel for the wind and waves and a Sendero GPS system with a voice note computer that gives directions. He even used the $3,000 device, about the size of a computer keyboard, to walk to a Starbucks from his hotel. Every 12 seconds it gave him a new cue. He used it to map a course on the bay, and he used it to get from San Francisco to Australia.

Navigating through ports is the trickiest part. That's when either Duncan or Habek goes to the bow with a monoscope and gives commands to avoid traffic.

''You put a lot of trust in the GPS system,'' Duncan said. ``Near Tahiti, we were going through a narrow channel with coral reef on either side. We'd never been there in our lives yet it was exactly how it was supposed to be. You go to a place blindly -- pardon the pun -- and you get there. It's amazing.''

Duncan and Habek survived a near-calamity 300 miles off the coast of New Caledonia during a bad storm in the Coral Sea. Duncan almost was washed overboard when a towering wave crashed on top of the boat.

''I grabbed onto a pole and hung on as everything in the cockpit dumped into the water,'' he said.

Their most interesting stop was at Palmerston in the Cook Islands, an isolated island with 67 residents.

Along the way, they have taught blind people how to sail.

''When my parents found out they had a blind kid they looked for role models and there weren't many besides Stevie Wonder and Ray Charles,'' said Duncan, who used to own a computer company in San Francisco. ``I learned to sail at age 13. It was clear I wouldn't be able to drive, so instead I got the keys to a sailboat.''

Duncan wants his voyage (which you can follow at www.BlindSailing.com) to inspire disabled people to broaden their horizons.

''I get treated one way when I have my cane in hand and an entirely different way when it's folded up,'' he said. ``I'm trying to show there's not such a big difference between a person with a disability and a person without one. That should be the case when you're interviewing for a job or ordering coffee at Starbucks or sailing.''

Or surfing. Billauer's message is similar to Duncan's: adapt and barriers disappear.

Billauer, 30, was about to join the pro surfing tour in 1996 when he broke his neck in a surfing accident. Rather than discard his passion, he adjusted his style. Now he lies prone on his board, props himself on his elbows and gets a little help from his friends, who push him into the waves.

''It's still the best feeling in the world,'' said Billauer who runs a foundation that teaches surfing to the disabled. ``And that feeling is -- freedom.''
Posted by Bernabe at 10:07 AM