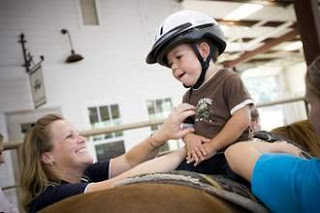 Many people associate the word "therapy" with doctors' offices and prescription medication.

She and the members of her staff at Windridge Therapeutic Equestrian Center in Gilmer are doing their best to provide a fun alternative to traditional rehabilitation through the use of horses.

"Horses provide therapy, life skills, communication and social skills," Dewkitt said. "Everything should be provided in a session."

Because of the unique benefits that come with riding horses, Ms. Dewkitt said, Windridge is able to help people with all kinds of disabilities, from autism and head injuries to drug addictions and delinquency.

With assistance from the horses, Ms. Dewkitt believes she and her staff can help anybody.One such client is 4-year-old Madalin Kowalik of Longview, who has been diagnosed with Rett Syndrome.

Madalin's mother, Shannon Kowalik, said Windridge was recommended to her while the family was working with the Early Childhood Intervention program.

"We're very pleased. It's wonderful," she said. "I would trade any other therapy for this one."

Ms. Kowalik said that although Madalin receives physical and occupational therapy at school, she can tell Madalin views that those efforts as work, whereas she genuinely enjoys coming to Windridge.

She said Madalin really enjoys spending time with her therapist, Celia Bower, and she can tell that everyone who works with her daughter actually cares about her.

Outside of Windridge, Madalin is just another 4-year-old, her mom said. She enjoys watching movies, jumping on the trampoline, swimming and listening to her mother read books to her.

Ms. Kowalik said she is convinced Windridge is the right place for her daughter, not only because it is the best type of therapy physically, but because of the joy in her daughter's face when they go to the center.

"When you tell her we're coming here, she is so thrilled," Ms. Kowalik said.

Windridge was founded as a nonprofit organization in 1988, with Ms. Dewkitt as the lone instructor.

When the center opened its doors in March 1989, it had just two patients.The program was dependant on volunteers at first because it was not generating enough revenue to support a paid staff.

But from there, the program steadily evolved, adding to it a number of trained instructors and more patients every year.

By the late 1990s, it became obvious that the original facilities were no longer large enough to house the constantly expanding group. Plans were formulated to build a state-of-the-art facility that would allow Windridge to not only continue growing, but to expand its research program as well.

The center purchased land next to its original location in 1997 and began the process of constructing a permanent home.

When the current facility opened in 2001, it already was completely paid for, with 78 percent of the funds coming directly from East Texans.

"We are a tribute to East Texas," Ms. Dewkitt said.

The 38,000-square-foot facility was completed with Windridge entirely debt-free.

Today, the center supports nine full-time instructors, all of whom are certified with the North American Riding for the Handicapped Association (NARHA), and helps almost 140 clients each week.

Clients' ages have spanned from 1 year old to 85, and the center has grown from six horses and five volunteers 20 years ago to 22 horses and more than 70 dedicated volunteers today.

They also have expanded what was once solely a therapeutic riding program to include therapeutic driving, hippotherapy and a teenage volunteer program.

Windridge is not just an educational tool for its clients but also serves as NARHA certification for volunteers who want to become full-time instructors.

The nine staff members had a combined 24 years of volunteer time before they becoming instructors.

Because therapeutic riding still is a relatively new concept, there are no universities that offer majors in it, so Windridge works as a school for those interested in pursuing it as a career.

Julia Bourcier, program director at Windridge, was a former volunteer and now oversees the instructors, helping them progress through the programs.

Ms. Bourcier began volunteering when she was 15.

A year later, Windridge began offering certification for those interested, and she made the choice to move forward with the program.

She spent a year volunteering at another center, which she said greatly increased her respect for the Windridge program.

"With that experience, I can tell you that this is one of the most professional and excellent centers there is," Ms. Bourcier said, placing Windridge in the top 10 percent of programs as far as facilities and community support.

The instructors spend time with clients in on-site classrooms as well as on the horses to teach riding skills, which will in turn correct posture, work muscles and evoke the best influence on the body.

The goal of the program is to better develop the rider as a whole person, not just his or her horsemanship.

The instructors play games and have the clients interact with the horse to motivate them to do the things they may not want to do.

"There are very few things that motivate (kids) as much as animals and toys."

Windridge partners with Kidz First Therapy in Longview to provide on-site therapy at its facility in Gilmer.

Ms. Bower, the hippotherapy director from Kidz First, works with the clients at Windridge to provide traditional physical therapy, such as stretching on a mat, in addition to the unique programs at the center.

She said the horse generally acts as a primer to the regular therapy.

She is a self-proclaimed "horse person" and has held a love for the animals her entire life.

She learned about hippotherapy while in physical therapy school, where she wrote papers and completed projects on the subject.

Bower left her home state of California after meeting with Dewkitt and discussing her future in the career. She moved to East Texas and volunteered at the center for a year before affiliating with Kidz First.

"It's phenomenal," she said of her experience with Windridge. "It's very well organized, very well run."

She said the staff at the center communicate well and have strong relationships with each other.

Ms. Bower said she always has been good with children and is grateful for the opportunity to do something she loves for a living.

In addition to helping children in need, the therapy program at Windridge is beginning to focus heavily on research for hippotherapy, which has not yet been validated through controlled testing.

A portion of the organization's new facilities has been dedicated to research and the staff is preparing for its first big project.

Through use of video, a climate-controlled room, a treadmill and multiple cutting-edge tools, such as a sensor that can accurately measure the movement of a rider's pelvis, the researchers are attempting to prove how much riding a horse actually moves a person's body.

The group also is studying how different riding positions and different horses affect the body in different ways.

The study will give the staff a more scientific way of choosing a particular horse based on a child's specific needs.

Madalin, for example, has trouble with balance and keeping her hands down, so with their research, the therapists will better be able to choose an animal that will tap in to her neurological senses.

More information about the programs at Windridge can be found at www.windridgetexas.com.

Very thoughtfull post on alternative therapy. It should be very much helpfull

Very thoughtfull post on Alternative medicine .It should be very much helpfull.