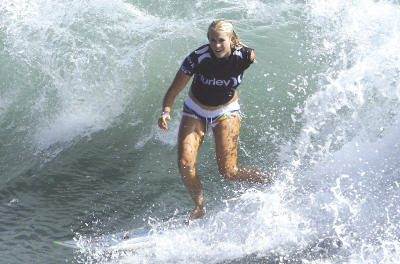 Click photo to enlarge«1»Bethany Hamilton and Alana Blanchard are two of the hardest ripping young female professional surfers to hit the water, surf magazines, and now, theaters near you.

"Soul Surfer," a Hollywood movie based on Hamilton's life, will debut in mainstream theaters April 8, sharing the inspiring story of Hamilton's return to competitive surfing after a shark attack left the young surfer girl from Kauai without an arm.

The real Hamilton and Blanchard play themselves in the water as the movie's surfing stunt doubles, which means the film has potential to showcase the talent of these two real life professional surfers.

Hamilton and Blanchard's friendship is central to the story portrayed in "Soul Surfer." In the film, Hamilton is played by AnnaSophia Robb, the blonde pixie-like girl from Bridge To Terabithia, and Blanchard is played by Lorraine Nicholson, Jack Nicholson's daughter. The film's cast is rounded out with Dennis Quaid, Helen Hunt and Carrie Underwood.

As a Hollywood film about young, female surfers in Hawaii, "Soul Surfer" will undoubtedly draw comparison to "Blue Crush," which also featured professional surfers doubling for actors in relatively unrealistic surf scenes. While "Blue Crush" was about girl power, "Soul Surfer" is the story of an athlete's personal journey of overcoming the loss of her arm with inner strength, courage and faith as she follows her dream of becoming a professional surfer.

In 2003, when she was 13 and considered one of the up-and-coming young surfers in Kauai, Hamilton had her left arm chomped off by a 14-foot tiger shark while surfing Tunnels with best friend Blanchard and Blanchard's father. Less than a month after loosing 60 percent of her blood and undergoing three surgeries, Hamilton paddled back out into the ocean, caught a wave and stood up. Her miraculous, courageous return to the sea was only the beginning of a successful competitive career.

Set apart from many of her peers, Hamilton is unquestionably a power surfer, excelling in barrels and big surf. Besides Blanchard, Hamilton is the only other female surfer on the Rip Curl pro international surf team. Though she has fallen short of qualifying for the Women's World Championship Tour, Hamilton competes in Women's star and qualifying events and has participated in Women's World Tour contests as a wildcard entry.

Hamilton is a focused competitor and will undoubtedly earn her place on the Women's World Tour before long.

Blanchard -- as any male or female surfer who hasn't been stranded on a remote coral atoll for the past few years will undoubtedly tell you -- is the hottest female surfer.

Blanchard has recently dominated the image of women's professional surfing, stealing the spotlight away from surfing and turning it toward the smallness of her bikini bottoms. Her message? Female professional surfers can be sexy and surf better than you.

In the water and out, both girls represent femininity and athleticism, but they do it in ways that are dramatically different.

Hamilton has chosen not to use a prosthetic and speaks publicly about loving who you are and the importance of inner beauty. She takes her job as a role model seriously, finding time to graciously respond to the many Facebook comments she receives from adoring little girls.

Now at age 20, she successfully manages her professional surf career and position as the face of the many charities she supports, including the Friends of Bethany Foundation, which supports shark attack survivors and traumatic amputees.

Bethany's faith has been central to her life and she has publicly spoken and published books about her Christian faith as a source of inspiration. For Hamilton, the answer to the question "Why me?" lies in her faith, and in the opportunity for her to use her story to inspire others to overcome challenges and find inspiration and inner strength as they pursued their dreams.

Don't go see "Soul Surfer" expecting authenticity -- or 90 minutes of Blanchard surfing in an itty bitty, teeny weenie bikini. But do go see this movie with a young girl or athlete, to be inspired, or to imagine what if? What if it was you who had to ask, as Hamilton did, "Why me?"

How would you answer?
Posted by Bernabe at 8:58 AM

Hi there I saw the movie and indeed ii is about the inner strenght and will of who you are. The movie and Bethany send a message very clearly. I loved it.
It did bring tears to my eyes, but lt'd worthed.
God bless.