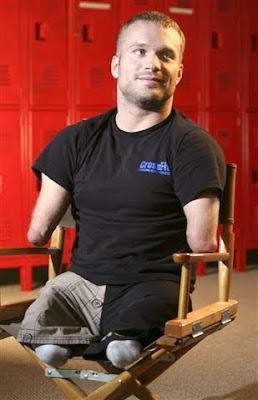 Kyle Maynard has no feet, no hands and, to him, no limitations.

Born with a condition called congenital amputation, he has limbs that end at the knees and elbows.

Despite his physical anomalies, his parents never let him believe he was disabled. As a devout Protestant with an unabated can-do attitude, Maynard made himself into a nationally recognized wrestler, best-selling author, fashion model, motivational speaker, entrepreneur and documentary film star.

Maynard's condition stunned his parents, Scott and Anita, when he was born on March 24, 1986.

He tried wearing prosthetic limbs when he was little, but found they just caused more trouble.

Scott and Anita always expected as much from him as with their three daughters. They taught him to eat with a special spoon and use a zipper puller to close his pants and dress himself.

He eats with a knife and fork, bathes and gets dressed without anyone's help. He drives a Dodge Durango with raised pedals and his wheelchair in the trunk.

The Doer
Maynard’s Keys•Despite having no hands or feet, he’s a nationally recognized athlete, a best-selling author, fashion model, motivational speaker, entrepreneur and star of a documentary film.

•“You can know your limits, but never stop trying to break them.”
He types 50 to 60 words a minute, uses a cell phone and works out several times a week. Weighing 145 pounds, he can bench-press more than 400 pounds.

The past three years he's lived on the top floor of a three-story house with two other bachelors in Suwanee, Ga., north of Atlanta.

The house has no special equipment other than a bathroom stool so he can reach the counter. To reach kitchen cabinets, he hoists himself onto the counter as though he were doing a pull-up.

"It ruins the illusions that I go through a lot of challenges, because I don't," Maynard told IBD. "I don't think about not having arms and legs every day. It doesn't really register. I am not impaired in any way."

In middle school, Maynard played football as defensive lineman. In high school, he took after his dad and hit the wrestling mat.

The start was inauspicious. The teen lost 35 matches in a row but bounced back with a vengeance, winning 36 matches as a senior. From there he earned national recognition, including ESPN's Espy Award for best athlete with a disability, the President's Award from the Sports Humanitarian Hall of Fame, induction into the National Wrestling Hall of Fame with the Medal of Courage, and a Lifetime Achievement Award from the secretary of health and human services in 2008 for being a role model and motivational speaker.
Posted by Bernabe at 10:53 AM