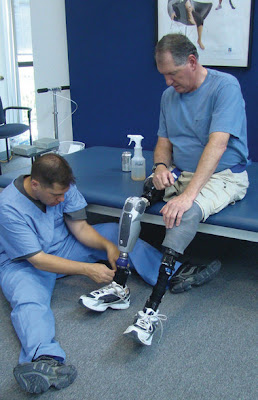 View full sizeLou Namm, a Vietnam veteran who lost both legs in 1969 when he stepped on a booby-trapped land mine, is the world’s first veteran, and one of 10 amputees overall, to receive the new prosthetic “Power Knee,” the only motor-powered device designed to function as an integrated extension of its user.

It’s also the first such knee prosthesis approved by the Department of Veterans Affairs.
“I tested it all last summer relative to how it affects the heart,” says Namm, 63, a West Deptford resident who has been a counseling psychologist at the VA Medical Center in Germantown for 37 years. “It has its own motor that works the leg and is triggered by pressure. It’s robotic, and quite a knee.

“Being a double amputee (right transfemoral and left transtibial) certainly has had its challenges, but the progression in technology over the past 40 years has brought my life back. I plan to use it permanently just getting up and down.”

Eddystone, Pa.-based Prosthetic Innovations, LLC, a pacesetter in progressive care for upper and lower extremity prosthetic clients, is one of five facilities in the U.S. certified for Power Knee, which is manufactured by Ossur.

“The new Power Knee provides the strength and safety which every above-knee amputee deserves,” says Timothy Rayer, a partner of Prosthetic Innovations. “We’re thrilled to be one of only a handful of prosthetic practices in the country certified for Ossur’s entire line of bionic technology prostheses.” 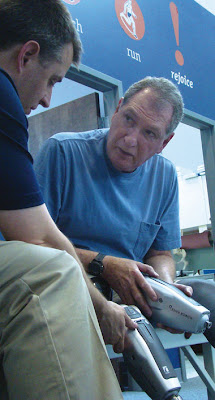 View full sizePhotos courtesy of Prosthetic InnovationsTop, Timothy Rayer, a partner of Prosthetic Innovations, LLC (in scrubs) is pictured with Lou Namm. Rayer is adjusting the new prosthetic 'Power Knee,' the only motor-powered device designed to function as an integrated extension of its user. Above, Michael Rayer, also a partner of Prosthetic Innovations, discusses the prosthetic knee with Namm. Below, Rayer assists Namm as he tries out the new knee.
It’s not surprising that Namm is a trailblazer for Power Knee. In 2007, he earned certification from the United States Golf Teachers Federation (USGTF) as a teaching professional, giving him license to teach the frustrating game to golfers without physical handicaps. He already had been certified to instruct other amputee golfers in the First Swing Program.

“Learning to play golf has been a challenge,” says Namm, who will not able to use the Power Knee when he plays because it’s still being tested for more challenging uses. “But in life there should always be challenges. People have asked why an amputee would take up golf, then become an instructor, and I’ve responded, ‘Why not?’ Helping others is a great way to live your life.

“It makes me feel good, helping other amputees who may feel they can’t do anything. It’s gratifying to see them succeed when they’ve had a tendency to hold back.”

Introduced to the game in 1989 when he and a supervisor were hitting a plastic ball, Namm’s golf game is “much better,” he says. He’s been scoring in the mid-80s, meaning that he plays much better than the average golfer, and has set a goal of breaking 80 this year. He hopes to begin teaching golf more and devote more time to teaching and playing when he retires from his full-time job in a few years.

An all-around athlete at Camden’s Woodrow Wilson High School, Sgt. Namm was assigned to the 82nd Airborne on May 8, 1969 when he stepped on a mine, losing his left leg immediately. Despite efforts to save his right leg, he lost that one, too. 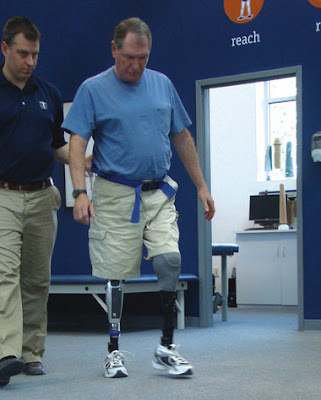 View full size“Doctors in the states weren’t convinced I’d make it, but I got through surgery and started to put my life together,” Namm says.

He entered college, earning undergraduate and masters degrees from Long Island University and then taking a job with VA. Today, he counsels disabled veterans and their families, noting “it’s been a good way of giving something back.”
Posted by Bernabe at 9:52 AM