Heroes having a ball in Vail 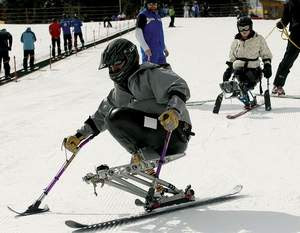 VAIL, Colorado — They don't struggle, they adapt and overcome.

More than two dozen wounded Afghanistan and Iraq war veterans are in town for the Vail Veterans Program.

They're easy to spot; they're aglow and terminally alive, because they almost weren't.

They have all sorts of things in common. For example, most of this week's crew were hit in the last year. Also, they have a healthy sense of irony. Most smiled as they filled out a bunch of “what-happens-if-I-get-hurt” forms. These people have been blown to hell and are fighting their way back.

“While it looks like just a nice ski vacation, it's much more,” said Harvey Naranjo, an occupational therapist with Walter Reed Army Medical Center. “It gives them a pretty clear picture about how they'll have to adapt for the rest of their lives.”

The physical injuries are fresh. The mental and emotional issues are just settling in for some.

“How do you get through airport security? Do you check your prosthetics or carry them with you?” said Naranjo, the sports program coordinator at Walter Reed's Department of Orthotics and Rehab. “I believe that mental health is 90 percent of the recovery process.” 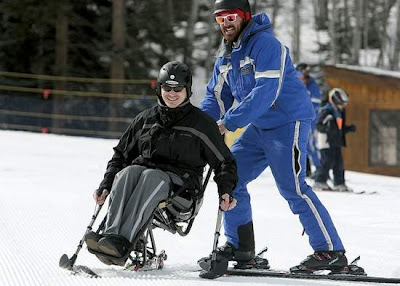 Fred Simpson, 31, was 499 yards from the Pakistan border when his unit was ambushed from four directions. Their attackers were hiding just inches into Pakistan, raining down all manner of destruction on Simpson's unit.

Nick Binnington, 33, is a former ski racer and competed for the British Army. He was a tactical air coordinator when his unit was sent in to clear an area in Afghanistan.

The Taliban was prepared and they walked into what the military euphemistically calls a “complex ambush.” A rocket propelled grenade went off over his head.

He smiles when he recalls that his commanding officer made sure he was OK — or as OK as a man could be who just had a bunch of shrapnel imbedded in his spine during an ambush — but was asking whether Binnington would be able to ski. He can.

He was headed up to Vail Mountain Wednesday morning. He's headed back to Afghanistan soon because, he says, he needs to.

“Walter Reed can fix you physically, but you have to get back on the bike. For me, I need to go back to Afghanistan,” Binnington said.

“There is only one Vail Veterans Program,” said Naranjo, who coordinated this week's trip. “There are many sports programs, but this is one of the standouts. Lots of people want to be part of it and there's a waiting list. Everybody wants to be my friend.” 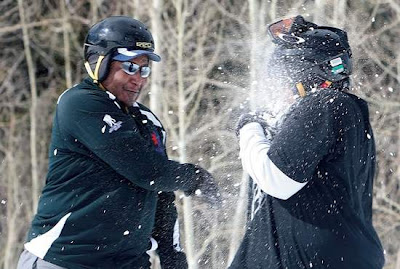 Driven to keep on
Cheryl Jensen helped launch the program eight years ago and has seen hundreds of wounded veterans roll through. She says she never gets over what war does to the human body.

“When I started this eight years ago, participation spiked two or three years in, like we thought it would,” she said. “I thought it was get better, but when I got the list for this group, the injuries and age were worse than they ever have been. And the numbers are increasing because of the type of conflict it is.”

Where most mere mortals would see despair, Jensen sees more and more people who need this program.

“I can't believe it's still happening, and it rejuvenated the drive to organize these programs,” she said.

The number of wounded warriors and their injuries are increasing.

“Vets are returning with multiple limb losses and secondary medical issues,” Naranjo said. “The Vail Veterans Program improves their physical abilities, of course, but also their social skills and self-esteem.”

They are all adapting and overcoming.

Binnington will go back to skiing and Afghanistan. He'll serve as an ambassador for the Wounded Warriors program. Simpson and others are moving on to whatever is next in their lives. Tyler Anderson launched a jiu jujitsu program.

“Opportunities like the Vail Veterans Program broadens their horizons. It gets them out to the mountains,” Binnington said, looking around the room where two dozen wounded vets were gearing up for a ski day. “All this leaves them with altered horizons, but horizons nonetheless.”
Posted by Bernabe at 9:23 AM