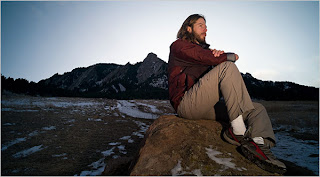 Aron Ralston has found celebrity on the adventure sports and motivational speaking circuits six years after cutting off his own hand to free himself from a boulder.

BOULDER, Colo. — He called it “my accident.”

On Saturday, April 26, 2003, without telling anyone his plans, Aron Lee Ralston set out alone through Robbers Roost, a steep, treacherous, largely abandoned parcel of southeastern Utah backcountry last bent to human will by Butch Cassidy and the Wild Bunch, who had found its forbidding terrain favorable to hiding from the law.

Five days later, after several unsuccessful attempts to dislodge an 800-pound boulder that was crushing his right hand, Ralston snapped first the radius and then the ulna of his forearm near the wrist, applied a makeshift tourniquet, sawed through the cartilage with a throwaway multitool, rappelled to the base of Blue John Canyon and hiked until he came upon a rescue helicopter.

“It was a blessing in a way,” Ralston, now 33, said of the experience. “It made me think about the way I was living.”

The story of the crucible in Blue John Canyon has resonated through countless discussions of fortitude, indomitability and the will to live. But for Ralston, who has found enduring celebrity on the adventure sports and motivational speaking circuits, it has produced a struggle to divine some transformative meaning.

“He’s more serious now, and by that I mean not somber but intense,” said Ralston’s younger sister, Sonja Ralston Elder, 28, a law student. “He does things with more focus, more purpose than before.”

Raised partly in a farmhouse in Ohio, Ralston moved around as a boy before enrolling at Carnegie Mellon University, where he studied mechanical engineering, French and piano. Among the East Coast intelligentsia, he said, he carried his Rocky Mountain home address as a badge of honor and a shield. He caught the ski bug, spent summers rafting the Arkansas River and set out to make his name as the first mountaineer to reach the summit of all 59 of Colorado’s 14,000-foot peaks alone in the wintertime.

But the episode in Blue John Canyon brought him a different sort of fame.

To some, Ralston’s story was an inspiration. His 368-page account, “Between a Rock and a Hard Place,” rose to No. 3 on the New York Times best-seller list. Corporations paid him $15,000 to $37,000 for motivational speeches. Wilderness conservation groups deployed him to raise donations. Schools invited him to speak to children, who often asked to examine his prosthetic hand. Travelers recognized him at airports. Strangers sent him letters. A film version of his ordeal is in the works.

To others, though, his story was the cautionary tale of a heedless fool. By Ralston’s own written account, he had nearly drowned, disturbed a bear and stumbled into an avalanche on earlier adventures. Failure to leave word of his whereabouts in Utah, ignoring one of the most basic rules of hiking, drew sharp rebukes.

“Aron Ralston has a death wish,” one book reviewer concluded.

A month after his rescue, Ralston appeared before a gymnasium of students at his childhood middle school, where he was greeted with enthusiastic applause. But the eighth graders asked probing questions, according to a transcript of the session. Ralston, still wearing a sling at the time, was prompted to discuss his reasons for venturing out alone, his thoughts on death and his prospects for a movie deal, to which he responded, “I don’t think I can really talk about that.”

So went the early appearances for a public speaker whose presentation, as described in promotional materials from his handlers at the Harry Walker Agency, “redefines the understanding of sacrifice, goal-attaining and what is truly important in our lives.”

By owning up to his mistakes, Ralston has managed to deflate some criticism. But even as he goes about sharing his life lessons, he has returned to unaccompanied wilderness adventure. He has entered several long-distance endurance races. In 2005, with the aid of his prosthetic, he completed his effort to solo-climb the 14,000-foot peaks of Colorado.

Last year, Ralston signed on to advise the arctic explorer Eric Larsen in his preparation to ascend Mount Everest. He has not decided whether to join the expedition. On the side, he has been organizing an African safari and an 18-day rafting voyage through the Grand Canyon.

“Before the accident, he had quit his job as an engineer and moved to Aspen to be in the outdoors and do what he loves,” Elder, his sister, said. “It’s just that what happened to him has vindicated this choice about doing what you love and not being defined by other people’s expectations.”

To continue the story click here
Posted by Bernabe at 10:49 AM