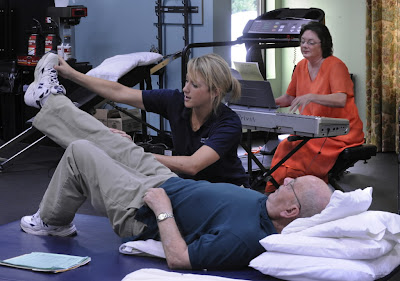 Print Email Save Twitter Social Media Del.icio.us Digg Facebook Reddit Page 1 of 2 SINGLE PAGE VIEW
Danny Lewy and wife Shannon were having a nice relaxing dinner at Mansurs on the Boulevard right after the first of the year when he had a epiphany. Why wouldn’t the lovely piano music that added so much to the ambience of the restaurant do the same for his physical therapy practice?

As he explained, physical therapy is often times a painful process. Music is relaxing, and relaxed patients tend to do better quicker.

“Pain is mental as much as physical, and music is great therapy,” said Lewy, owner of Lewy Physical Therapy. “It also helps break up the monotony of physical therapy.”

So, he approached the piano player from Mansurs with a proposition — how would she like to play for his patients once a week? Susan Stringer quickly said yes.

“I was very pleasantly surprised,” confessed Stringer of Lewy’s plan. “For years I’ve done pet therapy. I always knew it was wonderful, and I knew music therapy was wonderful from playing at nursing homes. I always wanted to do music therapy, but I didn’t know of an outlet.”

Stringer, who has been playing piano since fourth grade, was actually subbing for Mansurs’ regular piano player. It’s something she frequently does for her peers. Her steady music gigs are at Trinity Lutheran Church and teaching piano to an age-diverse group of students. But music is an avocation; her “day job” is as a pharmacist working in pharmaceutical sales and with Odyssey and Trinity Hospice.

Physical therapy typically lasts three to four weeks and many of the patients are in chronic pain. From the first Friday that Stringer played six months ago, Lewy knew he’d hit on something special. The tunes that waft through Lewy Physical Therapy on Siegen Lane every Friday morning make it a little easier to bear and mean patients will come for as long as necessary. Patients started requesting songs and, if Stringer didn’t already have the sheet music, she went out and got it.

Stringer plays to her audience. Because most patients tend to be older, she tailors her repertoire to that generation. Rarely does she play a WWII song that someone doesn’t share their memories, adding that they haven’t heard that particular song in a long time. She also has 300 pounds of Broadway tunes, especially musicals from the 1920s, ’30s, ’40s and selections from “Phantom of the Opera,” “Les Miserables” and “The Sound of Music”; and a long list of tunes from the 1950s. But when someone younger, say 40- or 50-something, is there she might throw in “Stairway to Heaven” or something by Journey.

“Always” is a biggie among the requests as are “As Time Goes By” and “Stardust.” Stringer’s favorites are the Etta James standard “At Last,” Patsy Cline’s “Crazy” and a “cool arrangement” of “Danny Boy.”

“Music brings people out of themselves into another realm. They don’t dwell on the therapy — the pain,” Stringer said.

Musical Fridays have also been good for the staff, breaking up the monotony. In fact, the very talented Megan Stagg, patient care coordinator, often joins in the fun by singing. Like Stringer, she takes requests. “They love the music and they ask for me if I’m not here,” Stagg added.

The ability of music to heal both mentally as well as physically is backed up by a wealth of anecdotes Stringer loves to share almost as much as she loves playing the piano. Like the woman for whom aqua therapy was very painful. The staff would leave the door open so she could hear Stringer play and each week she’d give Stringer a list of four different songs to play.

“When she was through, she came by the piano with tears in her eyes and said, ‘You don’t know how much this meant to me; it not only got me through therapy but added to my life. I have no way of hearing those special songs now, no one plays them anymore,’” Stringer said.