Amputee missing foot, but she still has her junior black belt 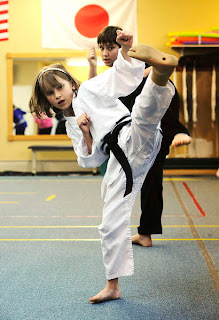 In the small class at Pelletiers Karate Academy, she's always the first or second to finish the routine - and finish perfectly. One of her instructors believes the 9-year-old, who recently earned her junior black belt, has the skills and talent to become a karate master.

The Auburn third-grader does it all with one foot.

"So far, people haven't really noticed because I do it so good," she said with a grin.

Jaedyn was born with fibula hemimelia, a disorder that affects the lower leg and foot. She was missing a toe and a bone in her lower left leg, and her tibia - the bone between knee and ankle - was shortened and bowed. Doctors told her parents, Jeff and Lisa Gousse, they had two options: limb lengthening or amputation.

Limb lengthening would require at least three major surgeries and a series of minor ones, plus work to correct Jaedyn's foot. She would likely spend her childhood in and out of hospitals.

But if they chose amputation, there would be no going back.

"It was an agonizing decision," Lisa Gousse said.

After meeting with specialists, the Gousses decided amputation would cause the least pain and offer the best chance of a normal life for their daughter. When Jaedyn was 10 and a half months old, doctors amputated her left foot at the ankle.

A few months later, she was walking with a prosthesis.

Years later, she decided she wanted to learn karate.

"I started dreaming about being a black belt," Jaedyn said.

Her parents always encouraged her to try activities, and they said yes to karate. Privately, Lisa Gousse asked Rich Pelletier, owner and instructor at Pelletiers Karate Academy in Lewiston, whether her missing foot would be a problem.

Pelletier had taught students with disabilities before, including one person who was blind. He had no reservations about enrolling the 7-year-old in his children's class.

"What I look at is what the kid can do when they get on the floor," he said.

Jaedyn, it turned out, could do everything. For three classes a week she ran with the other students during warm-ups, kept up during practices and perfected her katas (karate forms).

Jaedyn has done so well that she's a member of the karate school's demonstration team, a group that tours fairs, schools and other gatherings to demonstrate martial arts skills. Last month, she earned her junior black belt.

Karate is fun, Jaedyn said. "But it's kind of more work than fun because you try to get every move right."

There are few moves Jaedyn can't get right because of her foot. Her prosthesis doesn't bend at the ankle, which stops her from completing the perfect roundhouse kick. She substitutes a side kick.

Her foot doesn't limit her activities outside karate class, either. She's taken dance lessons and participated in cheering. This summer she'll attend activity summer camp, where she'll go to the beach and Funtown in Saco. Sometimes, at school or during one of her activities, someone will ask about her missing foot. The attention, she said, can be embarrassing. But she understands the curiosity.

"They've probably never encountered it before," she said.

At karate, it's rare for anyone to even notice she has a prosthesis, let alone question it.

Pelletier believes Jaedyn could rise to the highest karate level if she decides to stick with it. Jaedyn has no plans to quit.

She wants her full black belt.
Posted by Bernabe at 9:46 AM

I just found your blog and wanted to thank you for sharing Jaedyn's story. I lost my leg when I was only a few months old above the knee, and I've always had an interest in martial arts. I'm now in my mid-20s, but I have a blog where I talk about martial arts, being an amputee, and plenty of stuff in between. It's great to see more info about this on the web these days!

Martial arts can be a real benefit to amputees (especially young amputees), and in particular I hope plenty of parents caring for kids like Jaedyn (and me when I was younger) find this story and keep it in mind for their children.

Thank you Sean, I appreciate you taking time to make a comment. THats the purpose of this blog is to show that dis-abilities is truly in the mind. This may sound cliche, we can do anything we put our minds to. There is too much information on the negative, it's time for what we can do as human and spiritual beings! Thank you again!!