Amputee hang glider amazes, inspires those around him

When Mickey Sarraille glides along a warm, mid-afternoon breeze thousands of feet above Lake Elsinore, he is free. Soaring over the Ortega Mountains on his hang glider, he is whole.

"When I'm up there, I lose my disability," said Sarraille, 49, a 27-year hang gliding veteran. "To climb 10,000 feet and fly across the valley, there is nothing like the freedom of flying."

His disability becomes apparent on landings, as he hops on his right leg to disassemble his glider. His left leg was amputated when he was 17, the result of a motorcycle accident. 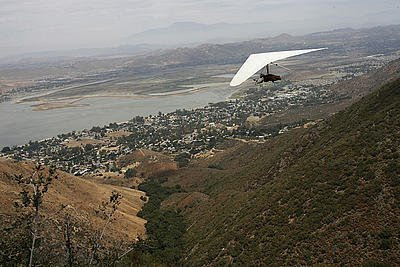 Sarraille has logged more than 3,000 flight hours and competes nationally. This week, the former president of the Lake Elsinore Hang Gliders Association is a participant in the King Mountain 2009 National Hang Gliding Championships.

As of Thursday, Sarraille said he was in 30th place after his first two flights.

"I'm not doing too good," Sarraille admits. "I just want to go out today and finish strong."

To colleagues, he is no longer a novelty, but an equal. "From many hang gliders' perspective, they have a hard time even understanding how he does it," said Joe Greblo, a 37-year hang gliding instructor from Los Angeles who has seen Sarraille in action. "He's definitely an inspiration to us all."

As a teen growing up in Lake Elsinore in southwestern Riverside County, he said he was good at baseball and tennis.

That all changed in 1977, when a motorist broadsided Sarraille's motorcycle and drove off, leaving him unconscious.

When he woke up, his left leg was gone.

"I didn't have to make any decisions," Sarraille said about the amputation. "Those decisions were made for me."

Sarraille said he didn't fade into a deep depression as many around him thought he would, but everyday life became difficult. 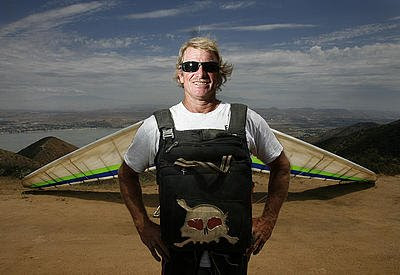 "Just going to the grocery store became difficult," Sarraille said. "I didn't play much tennis or baseball after that."

It wasn't until 1982 when he got his first exposure to the sport, when he would regularly watch his friends perform loop after loop in the Elsinore skies.

Friends David Gibson, John Heiney and Vince Collins were some of the world's best hang gliders. Heiney is a four-time aerobatic hang gliding champion and holds the world record for most consecutive loops.

"I watched them and said, "I have to do that," Sarraille said.

Taking off and landing the 75-pound glider typically takes the use of both legs. He takes several hops before launching himself into the breeze, and he uses his powerful right foot as a brake during landings.

Gibson, who is also in Idaho this week, said Sarraille has a combination of "tremendous strength, superlative balance and tireless work ethic."

"He's got true grit and determination, which are two things that most people who try to hang glide lack," Gibson said.

Sarraille said he learned his technique through years of trial and error.

Sarraille, for all of his accomplishments, still believes he has a long way to go in the sport but said he finds camaraderie and support from his competitors.

"Everyone is really supportive," Sarraille said. "I think everyone is more afraid than I am."