Patients at Walter Reed, Who Have Lost Limbs but Not Their Ability to Laugh, Find That a Joke Can Be the Best Therapy 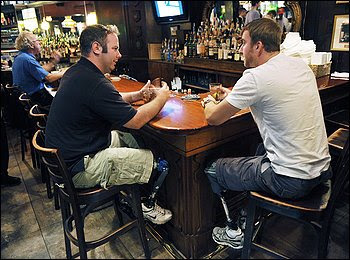 Pat Murray, left, and Kevin Blanchard, each of whom lost a leg while serving in Iraq, have a drink at Martin's Tavern in Georgetown. (Photos By Bill O'leary -- The Washington Post) 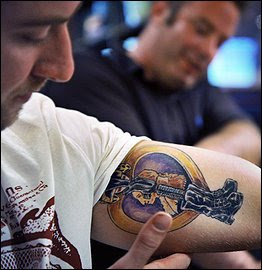 Blanchard displays one of his tattoos: a purple heart with soldier's boots at the end of a rifle. (Bill O'leary - Twp) 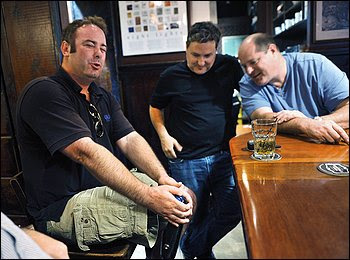 He knows they're going to stare. They always stare.

As soon as Pat Murray steps in the elevator, they'll notice his prosthetic leg and maybe accurately surmise that, yes, he is an Iraq war veteran, and, yes, he got blown up. Then the sadness will sink in, the pity, and they'll give him that look, which he can sense even if he doesn't see, and it will be an uncomfortable few floors up.

So as Murray approaches the elevator and the woman thrusts her hand between the closing doors for him, he says, "Careful, you can lose a limb that way."

"Oooh," the woman says, noticing Murray's metal leg. She's obviously shocked, unsure of what to say or how to act. Murray flashes a smile, lets loose an "it's okay" chuckle, and suddenly the ride up isn't nearly so awkward after all.

It's that type of humor -- spontaneous (he once asked his doctor when his leg would grow back), cunning (he tells children who ask about his "robot" leg that he didn't eat his vegetables) and, at times, gruesome (there are stump jokes that can't be printed here) -- that helped him come to terms with the fact that his right leg is no more.

It was at Walter Reed Army Medical Center that Murray, who was a corporal in the Marine Corps, not only learned to walk again, but to laugh. Although doctors and therapists can patch up the physical wounds of war, it is often the humor -- soldier to soldier, Marine to Marine, patient to patient -- that in the space of a punch line can heal as well as the best medicine.

Yes, the humor can be offensive and galling -- burn victims sometimes call each other "crispy," for example. The sphere of people who can get away with telling amputee jokes is tightly defined, and not every wounded warrior is able to crack jokes about the fact that he has a hard time going up stairs or holding a coffee cup. But for others, it's the ultimate palliative as they move from denial to anger to acceptance.

"You have to have fun with it," said Kevin Blanchard, who lost his left leg while on patrol in Iraq in 2005. "And you can get away with murder, because who's going to yell at an amputee?"

Wounds heal faster when they become not a wound but a practical joke, a gag. At a restaurant with a friend, Blanchard, now a student at George Washington University, stabbed his prosthetic foot with a steak knife and pretended to howl in pain. At Kings Dominion amusement park, he removed his leg before getting on a suspended roller coaster where riders' feet dangle freely. As the ride coasted to a stop, he started screaming loud enough for those in line to hear: "Do not get on that ride! It'll rip your legs off!"

Murray says laughter helped him keep his "mind off the fact of what an absolutely horrible situation you are in -- how you went from being a big, bad-ass terrorist fighter to having your mother pushing you around in a wheelchair."

It helped that his fellow Marines dished it out in the physical therapy room as if they had never left the front lines. He loved how the sad, tragic place could give way so easily to hilarity. How service members called each other "Gimpy" and "Peg-leg" and "one-legged bastard." Those with one arm were known as "Five" for the number of fingers they had left.