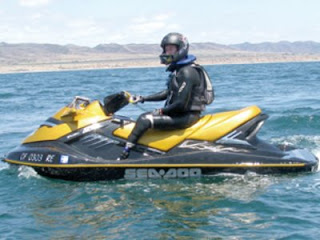 Saturday, July 11, 2009 one comment | read comments | post a comment
Racing a Jet Ski at 60 miles per hour in 58 miles of open ocean is not easy for any athlete of any skill level. That’s what makes the task ahead even more daunting for La Jollan Warren Frank and Point Loman Ryan Levinson, who plan to race July 12 in the Long Beach to Catalina and Back Offshore National Championship.

La Jollan Warren Frank, who has a prosthetic leg as the result of a dirt bike accident, will compete in a July 12 offshore race with Ryan Levinson.
Their participation is especially impressive because Frank and Levinson are physically compromised athletes. Frank’s left leg is amputated above the knee, and Levinson was diagnosed with facioscapulohumeral muscular dystrophy (FSHMD), a genetic disorder that results in muscle loss.

Frank and Levinson are the first compromised athletes to compete in the annual personal watercraft race and will participate in the challenged athletes division. Both athletes will face unique challenges during the race.

For Frank, the challenges of the race are straightforward - but made more complicated by his prosthetic leg.

“If everything is meant to be the way it’s supposed to be, I don’t really see it as a disability,” Frank said. “Sometimes I get the craziest cramp in my calf muscle and I have to take my prosthetic off. Hopefully that doesn’t happen during the race.”

Being a single-leg amputee, Frank might be considered among the more able-bodied of the compromised athletes. He said he doesn’t consider himself limited in the least.

“(It’s difficult) only when I have to go to the bathroom when I’m sleeping (because) I have to use crutches,” Frank said.

Twelve years ago, Frank was riding a dirt bike in Ocotillo Wells when he crashed into a dune buggy. Surgery was required to mend the injury, which was so severe that a metal tube was inserted into his fibula and metal bolts were inserted in his leg from his knee to his foot to prevent the bones from moving.

“I’ve always been active and kind of hyper, and those nine, ten months I was in a wheelchair or on crutches, I was going insane not knowing whether I was going to get better or not,” Frank said.

After six months passed without bone union, doctors cut a hole in Frank’s hip and put that bone in his ankle. The transplant resulted in a bone infection that was treated intravenously - to no avail. About a year after the dirt bike accident, Frank faced a decision: amputate his left leg above the knee or keep it in a compromised state. Frank decided to proceed with the amputation.

Point Loman Ryan Levinson, who suffers from a specific form of muscular dystrophy, will participate in the 58-mile Long Beach to Catalina and Back Offshore National Championship on July 12.
“My whole surgery was planned,” Frank said. “It wasn’t like a crazy, gnarly car accident where you woke up missing your leg. I had time to make the decision.”

Two months after his amputation and being fitted with a prosthesis, Frank participated in a bike race and never looked back. Frank’s main activity is the triathlon, and his next one is the Pacific Coast Triathlon on July 26 in Newport Beach. 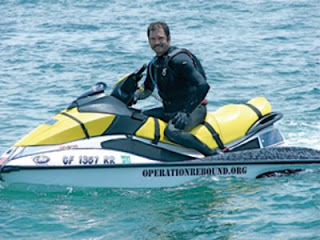 Frank, 42, has lived in La Jolla since moving to California from South Africa in 1984. Aside from the constant care, Frank doesn’t see his amputation as a huge challenge from day to day.

“In the morning, I put on my leg and it’s a certain size. Throughout the day, the prosthesis is on pretty tight and squeezes fluid out of my limb and I have to take it off and add a sock,” Frank said. “I start off with nothing and I end up with two socks on it.”

Levinson has no abdominals as a result of his muscular dystrophy, which means he has a core imbalance. This requires him to wear a back brace during the race, in addition to a full-face helmet and kneepads.

“I don’t have any core stability anymore, so when I take a hard hit, I can’t always brace against it and a lot of time I get slammed into the ski,” Levinson said. “So it’s being able to ride with enough technique and guts that I can take these hits over and over and still maintain speed.”

FSHMD is a genetic disorder that Levinson knew ran in his family, but he didn’t know he had it until being diagnosed definitively 10 years ago. The 37-year-old emergency medical technician is losing muscles at a steady rate, which makes daily tasks like brushing his teeth, washing his hair, putting on a shirt and walking up stairs very difficult.

“Usually, first I’ll notice a change in function, and then within a few weeks I’d see a muscle group atrophy. It goes from kind of toned in a certain area to nothing - it vaporizes,” Levinson said. “You look at me and there’s whole muscle groups that are gone. You can see the bone through the skin. In other areas, the muscles are extra big - they’ve hypertrophied to compensate as much as they can.”

Levinson said about 90 percent of his strength comes from his deltoid muscles. He said he has no chest muscles, no abdominals and no muscles on the inside of one of his thighs, adding that about half his calf muscles are gone.

“My life is loss, but at a much more accelerated rate than a lot of other people. Instead of focusing on the loss, I focus on what hasn’t been lost yet,” Levinson said.

Levinson now lives in Point Loma but has also lived in Pacific Beach. He used to work at Harry’s Surf Shop in PB, proposed to his wife on the stairs at Tourmaline Beach and got married on the sand at Mission Beach. His favorite spots to surf are the Sunset Cliffs breaks south of Garbage Beach and the reefs near Pacific Beach Point.

“I can’t carry those boards down to the cliffs anymore,” Levinson said. “So these spots that I’ve been surfing for a long time that mean so much to me were off the list for a while until I got a personal watercraft, and now I can access some of these spots again. It got me back in the game. For me, it’s just as much of an accessible tool as a wheelchair would be for someone who can’t walk down the street.”

Levinson and Frank have been training for the Long Beach to Catalina and Back Offshore National Championship for the last couple of months, combining regular exercise with intensive training sessions on Camp Pendleton with Shawn Alladio, the owner of K38 water safety. Both agree that training for the race has been tough.

“The biggest challenge is the amount of pain it takes, especially on your legs and your back because you’re kind of in a squat (position) the whole time,” Levinson said. “It’s like doing squats for an hour while people are slamming you with a bat.”

Frank, who also makes training runs from Shelter Island to Scripps Pier, admitted that after one session with Alladio he almost backed out.

“Our first training ride, I was almost going to back out just seeing how difficult it was,” Frank said. “I passed the point of no return, so I figured I might as well just give it a shot. I’m feeling pretty confident now.”

The confidence and grit both men carry into the race should serve as a source of inspiration to others - no matter where Levinson and Frank might finish.

Anthony Gentile is a reporter for our media partner, La Jolla Village News, where this story was originally published.

Read more: http://www.sdnn.com/sandiego/2009-07-11/sports/gutsy-local-athletes-up-for-grueling-ocean-challenge#ixzz0LFd3iSCu&C
Posted by Bernabe at 9:15 AM

We are so proud of Warren Frank and Ryan Levinson in our offshore racing community. The heart and soul of a person is the equalizer in how we choose to live our lives, one simply must get going and move forward. Life is about motion, movement, and the next action. It is an honor to work at thier side in honing ocean skills on these unique small boats. Way to go guys! Show us how it's done!
Shawn Alladio

Thank you for your comments, we Love to hear from our readers. You are absolutely right, It's all about action, there is a saying - "Intelligence is the thought and vision of what you want, Wisdom is taking action and making it a reality!" Thanks again!