'I did not give up': Triple amputee travels country, motivating others 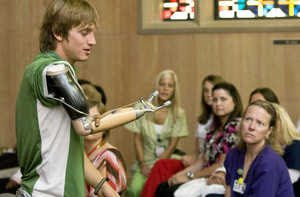 He looks and sounds like the stereotype of a California surfer dude: athletic, disheveled blond hair, tan skin and a quick, easy laugh.

But Cameron Clapp, 23, of San Luis Obisbo, Calif., is far from typical.

Clapp, a triple amputee and motivational speaker, was at St. Elizabeth's Hospital in Belleville on Monday afternoon to give a presentation to nurses, physical therapists, doctors and anyone else with an interest in physical disabilities.

When he was 15, Clapp was hit by a train near his home. He lost both his legs above the knee and his right arm just below the shoulder. He was drunk when he decided to cross the tracks to get to the beach near his home and never saw the train coming.

"Chug a lug a lug -- BOOM! Took me out," Clapp said. "I was very lucky. I survived. It was a miracle I survived, and it was my poor decisions that caused my accident. I had damaged my body, physically, beyond repair. I was 15 years old and a triple amputee, and I knew my life had changed forever."

Clapp arrived in the St. Louis area Sunday and will be here for the rest of the week. He is the keynote motivational speaker for the National Junior Disability Games in St. Peters, Mo., and will visit schools and hospitals to talk to students and other individuals with disabilities.

Before his accident, Clapp was an avid surfer and loved running. He played soccer, baseball, basketball and football.

"The doctor told my parents I would never walk again and to get a good wheelchair," he said. "You know what? We bailed on that guy."

He decided he would walk again and ditched the wheelchair.

"It was so hard. It was like walking on stilts," he said. "For two months, no progress. I failed. But failure does not mean defeat, and I did not give up."

Therapists recommended he start swimming to build the muscles he'd need to learn to walk again with prosthetics. He admitted he was skeptical about how swimming would help him walk again.

"My stepdad, the surfer, picked me up and tossed me in the pool and I thought, "Dude! I have one arm and no legs. I'm just going to swim around in circles!" he said. "But I did it, and I started building those muscles I needed to walk."

After years of conditioning and training, and using specialized prosthetic feet and an arm, Clapp now runs, surfs, swims, golfs, participates in triathlons, snow skis and travels the country motivating people and visiting wounded soldiers at veterans hospitals to inspire those with injuries similar to his.

"I went to Walter Reed (Army Medical Center, in Washington) and worked with several soldiers who had injuries similar to mine," he said. "That's what it's all about -- helping each other and being there for each other."

In 2006, Clapp was awarded the Shining Star Award by Just One Break Inc., a nonprofit organization founded by Eleanor Roosevelt. The award recognizes individuals whose "outlook and achievements provide inspiration and encouragement for people with disabilities."

Clapp joined other well-known individuals such as Christopher Reeve and Ray Charles as recipients of the award.

He has appeared in an episode of "My Name is Earl," featured on CNN, on the Discovery Channel, in People Magazine and in the New York Times, and most recently appears in the movie "Stop-Loss."

"My mission is to go around the country and talk to the youth of America and inspire them to make good choices," Clapp said. "I want to make an impact."

For more information about Clapp and his story, visit his Web site at www.cameronclapp.com.