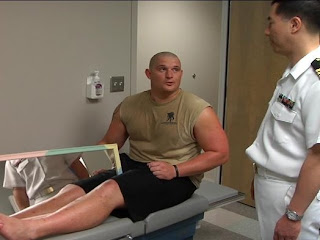 CNN article on how mirror therapy came to Walter ReedWASHINGTON - When Army Spc. Bryan Wagner is driving, he pushes the gas pedal with his right foot in spite of the fact that he doesn’t have a right foot.

“I drive with it,” the 23-year-old said, referring to the prosthetic limb that replaced the real one he lost in Baghdad on Dec. 17, 2007, when the Humvee he was a gunner on ran over an improvised explosive device.

But Wagner, an Exeter, Calif. native with a military buzz and the burly build of an offensive lineman, says vehicular matters aren’t high on his to-do list. Neither is running a marathon, which he has somehow done, and snowboarding, which he still enjoys.

What dogs him is the “phantom pain” he feels in the limb he lost, a common complaint among amputees dating back to previous wars and even showing up in literature.

In David Guterson’s famous novel “Snow Falling on Cedars”, about the Japanese-American experience during and after World War II, the protagonist Ishmael Chambers complains of pain from his missing left arm. 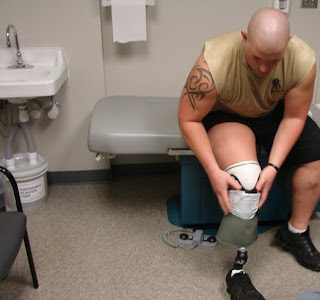 As of July 1, a total of 904 service members have undergone amputations resulting from the wars in Iraq and Afghanistan. 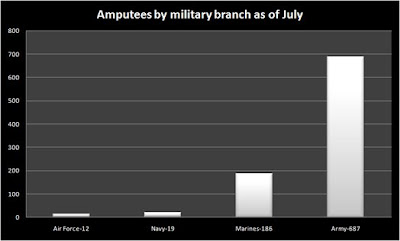 A total of 904 service members have undergone amputations as a result of the wars in Iraq and Afghanistan. This shows the breakdown among the different branches

But a new technique called “mirror image therapy” is using the reflection of the intact limb to trick Wagner’s brain—in a good way.

Removing his prosthetic limb and sitting up, Wagner places a mirror on its side facing his outstretched left leg. He then performs a number of exercises with his left foot, like rolling it in circles and imitating pushing the gas pedal.

All the while he is looking at the left foot’s reflection, which engenders a feeling of movement in his invisible right foot.

Patients will typically do activities like these 15 minutes a day, five days a week for a total of eight weeks. If the pain persists, which according to Tsao it can even after two years without the therapy, they start the cycle again.

The Army medical center has treated 652 of the total 904 service members who have lost arms, legs, arms and hands. It doesn’t count lost fingers or toes.

The hand isn’t quicker than the eye

There are two theories as to what causes phantom pain.

The first deals with mismatched signals between a person’s vision and the intact neurons that dictated the movement of the missing limb. Eyes see one thing, neurons another.

Another theory posits that proprioceptive—or muscle—memory retains certain positions of limbs, some of which are painfully distressing.

Before working out with the mirror, Wagner said he often had the sensation that one toe was crossed over another or he felt like someone was stabbing him between his toes.

Dr. Tsao suggests the mirror therapy is “like a computer wiping your memory buffer.”

Starting in 2006, “mirror image therapy” has since grown into wide usage. Though it has had mixed results among amputees and hasn’t been very successful yet with arm or hand phantom pain, Wagner is a testament to its alleviatory power.

Channeling the theories behind the therapy, Wagner has turned it into his own motivational mantra.

“Disability is only a state of mind.”

Click here for Video.
Posted by Bernabe at 11:46 AM

Brilliant Article. I have been following this story and wished to introduce you to http://www.mirrorboxtherapy.com which has even more information. We also have a folding mirror box that is readily available at http://www.reflexpainmanagement.com

For more information contact our team on the following numbers: