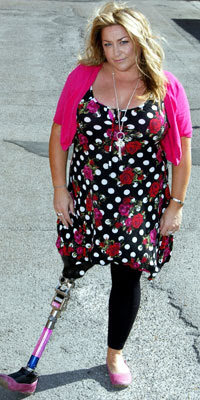 Comments (4)Recommend (8) HER leg was ripped off during a horrific motorcycle accident.

But three years later Carol Forshaw is battling to buy herself a prosthetic replacement after claiming the NHS hasn’t provided her with an appropriate one.

The 35-year-old lost her right leg when she was involved in a car crash in Northumberland.

And she has spent the last three years fighting to get a properly-fitted prosthetic limb that will allow her to get on with her life.

Carol, of Stakeford, Northumberland, says the NHS have been unable to help her and she has decided to try and raise £26,000 to privately buy a leg.

She said: “If somebody told me that I would still be trying to get a prosthetic limb three years after my accident I wouldn’t have believed them.

“It’s just really frustrating. I work and I want to continue working but it’s really difficult when you don’t have a leg that fits properly.

“You have to carry kit around with you all the time and I have had a number of broken bones because the limbs don’t fit correctly.

“Because of the ill fitting leg I fell over. I’m a really determined character and all I want is to live a normal life and get my life back on track. The NHS are really under staffed and it’s difficult for amputees to make any progress.”

Carol’s life was changed forever when she lost control of her bike on a hillside in July 2008.

Careering into the path of an oncoming car, she was unable to get out the way quickly enough to stop the vehicle slicing through her leg, removing all the skin and tissue down to the bone.

She was left fighting for life on the roadside at Cragside, near Rothbury, as the blood drained from her body.

Had it not been for a crew from the Great North Air Ambulance, which flew her to Newcastle General Hospital in time for a life-saving total blood transfusion, she believes she would not have survived.

But now Carol needs to raise £26,000 for a private prosthetic limb. She has already managed to raise £13,000 through savings and fundraisers in hope to get on with her life.

A spokesperson for The Newcastle upon Tyne Hospitals Foundation Trust said: “Miss Forshaw is seen regularly at our Disablement Services Centre. We have not previously been made aware of these concerns and our team would be more than happy to discuss these with her, at her next attendance at the centre.”

Carol said: “When I lost my leg I remember thinking life was all about glamour and looking good. But now all I want is to get from A to B.

“I have already managed to raise half of the money through saving and various fundraisers.

“My colleagues and friends are now trying their best to help me raise the rest of the cash.”

A team of 11 friends of will now cycle from Whitehaven to Sunderland between May 20 and May 22 to help Carol reach her target.

Anyone wishing to help can email Carol at carolforshaw@hotmail.com