A double amputee who scaled summit of Everest 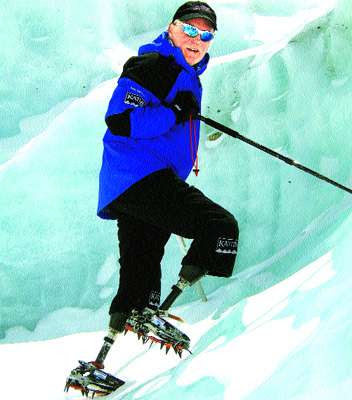 Four o'clock in the afternoon on a hot summer's day and I'm to meet Mark Inglis — wine maker, motivational speaker, author, first double amputee to climb Mount Everest — at the Café Coffee Day on Bandra's Carter Road sea face. I arrive early, optimistic of finding a table in the air conditioned interior, but that's not to be. When Mark arrives ten minutes later, with his agent in tow, I'm seated all hot and bothered outside, under a garden umbrella, fanning myself with a menu.

One of the advantages of coming early is that I'm positioned with maximum umbrella coverage, while the two New Zealanders have the sun on their faces. "It's so hot," I say by way of a conversation starter, adding "but an adventurer like you is probably used to it." "I'm more used to the cold actually," says Inglis, with a grin.

For those who don't know the story, Inglis was trapped in a cave for eleven days while attempting to climb Mount Cook, New Zealand's highest peak. He was eventually rescued, but both his legs were so badly frostbitten that they had to be amputated below the knee. Twenty years later, at the age of 43, Inglis returned to Mount Cook and conquered the summit. The climb was documented in a film titled No Mean Feat: The Mark Inglis Story. Four years later, he went on to climb Mount Everest, and this time the dramatic and somewhat controversial (more on that later) event was captured in a documentary titled Everest: Beyond The Limit.

Continue Story click here.
Posted by Bernabe at 10:08 AM