A neuro-engineer’s call to arms 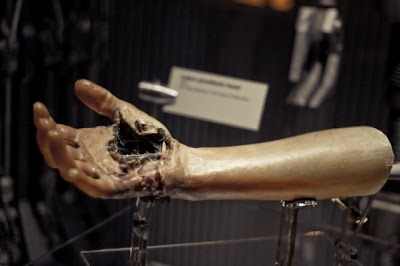 Attached at the hip, your body and you do everything together, silently communicating with only the slightest misunderstandings. You and your body make tacit agreements to type on a keyboard, jerk away from a hot stove or reach toward a light switch in the dark, and recognition of your teamwork comes only as an afterthought. It’s likely the closest relationship you’ll ever have.
But sometimes that relationship goes sour. Like a two-timing boyfriend, your body can be supremely deceitful. Things fall apart: With loss of limb, paths of communication get shut down, and what was once a strong partnership can turn into a daily battle against pain from an imaginary appendage. Healthy bodies can deceive too. The “rubber hand illusion,” in which your hand, hidden behind a screen, and a visible rubber hand are stroked simultaneously, convinces able-bodied people that an inanimate hunk of rubber belongs to them. When a hammer aims to strike the rubber appendage, subjects recoil as if their own fingers were in danger.

We usually think about our physical identity in terms of where our body starts and ends, says Shaun Gallagher, a cognitive scientist at the University of Central Florida and author of the book How the Body Shapes the Mind. “But it turns out that it’s very fragile, that sense of identity, and you can do all sorts of interesting things with it.”

One of those interesting things is happening at Northwestern University, where advances in prosthetic limbs have demonstrated the enormous flexibility of the connection between brain and body — and how that flexibility can be manipulated to create the next generation of motorized prosthetics. Their thought-controlled prosthetics challenge the conventional sense of “me,” asking where the boundaries of human embodiment truly lie. Are we simply flesh and bone, or are we what we interact with?

In February, Northwestern’s Todd Kuiken described a process called targeted reinnervation at a symposium for the annual American Association for the Advancement of Science conference. Kuiken, the director of the Neural Engineering Center for Artificial Limbs at the Rehabilitation Institute of Chicago, pioneered the process, which allows amputees to control their prosthetic arms with amazing dexterity. You can watch videos of Kuiken’s patients moving heavy hammers and picking up crackers without leaving a crumbly mess. What’s more, the patients achieve this mastery of their artificial arms merely by thinking about moving them.

To accomplish this feat, a doctor first severs the nerves leading to the patient’s chest muscles, or another nearby muscle set. Then, the nerves that previously led to the patient’s arm — the ones that now are truncated at the arm’s stump — are redirected and attached to the chest muscles. These nerves are still capable of sending signals. When a patient thinks about bending his elbow, the nerves to those muscles still fire, but instead of finding themselves at a dead end, they wind up in the chest, stimulating electrodes implanted above their pruned ends. The electrodes control the movement of the motorized prosthesis strapped to the patient’s torso, and the artificial elbow bends.

While this is a remarkable advance in itself, it still leaves amputees unable to feel what they touch; targeted reinnervation patients have to watch their prosthetic arm carefully in order to make sure that it’s actually grasping an object. That may be about to change, though.

Recently, Kuiken’s team has found that sensory nerves for the arm (in addition to the original motor nerves) can be redirected to skin elsewhere on the body. A rig can be devised in which touch sensors on the prosthetic arm send signals to a motorized device that crawls across the reinnervated skin. The device pokes the appropriate sensory nerves with a plunger, allowing the patient to feel what he — or the prosthetic arm — is touching. And just like in the rubber hand illusion, that sense of touch can trick amputees into embodying the external limb.

This development points toward prostheses that are ever more like natural, biological limbs. Depending on your generation’s brand of fantasy, it’s now reasonable to imagine amputees walking around with prosthetic hands like Luke Skywalker or Peter Pettigrew. But there are still several steps to be taken before these fictions become a reality, before amputees can truly become one with their artificial limbs.

One of the remaining barriers to total integration of prosthetic limbs is the seemingly simple ability to know our bodies, a phenomenon known as proprioception. “Right now, amputees have to depend entirely on their vision to know where their limb is,” says neuroscientist Paul Marasco, one of Todd Kuiken’s collaborators at Northwestern. “Vision is not really a sense that’s set up for that.”

Proprioception is an innate sense — of the angle of a quizzically cocked head, the speed of fluttering jazz hands, or the bend of our knees climbing stairs in the dark. Experts separate our proprioceptive sense into two categories: the kinesthetic (the motion of our bodies) and the positional (the location of our body parts). It’s one of the most profoundly under appreciated aspects of our consciousness. And it is precisely because we take proprioception for granted that it is so difficult to untangle.

“Proprioception is really not so well understood — how it’s operating, what it’s doing,” says Marasco. His current research is teasing apart how our sense of limb position and movement is organized in our brains, starting with mapping those neural connections in mice.

It’s difficult to segment proprioception into its component neural parts when the position and motion of our bodies seem so fluid. Somehow, our brains compile information about the length of a muscle, the stretching of skin or the angle of a joint and translate it into a comprehensive sense of being.

That difficulty is compounded by the sheer number of positions that our body can assume. There are 27 points of articulation in an arm, notes Amy Blank, a PhD candidate at Johns Hopkins University who has done experiments to determine just how essential proprioception is to the functioning of a prosthetic limb. Understanding feedback on the position and movement of all those points will be an extremely challenging task. “In some ways I feel fortunate that I’m not working on the biology side as much,” said Blank, whose research focuses on robotics.

As a better biological understanding of proprioception emerges, researchers hope to develop prosthetic limbs that can stimulate nerves to restore a sense of position and movement — and thereby become increasingly united with the wearer’s self image. And if amputees can call a prosthesis part of their bodies, what’s limiting the rest of us to our heads, shoulders, knees and toes? Weirdly, the cars that we drive or the computers that we use could be as much a part of our bodies as these prostheses soon will be.

Our bodies will certainly be able to adapt to proprioceptive prosthetics, says Marasco, who is continually astounded by patients’ accommodation of the new limbs. “But our ability to build a machine that can do all the things that our hand can do is a different story,” he says. The next generation of prostheses will be limited not by our bodies’ nearly infinite plasticity, but by our engineering capabilities.
Posted by Bernabe at 9:46 AM