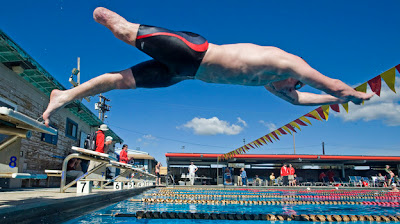 Nicholas Gibbons, a single amputee with the British Royal Marines team, takes off from the blocks during practice Feb. 21 in Camp Pendleton, Calif., for the inaugural Marine Corps Trials. Fifty athletes were chosen as members of the All-Marine team for the Warrior Games.

Michael Goulding/AP Nicholas Gibbons, a single amputee with the British Royal Marines team, takes off from the blocks during practice Feb. 21 in Camp Pendleton, Calif., for the inaugural Marine Corps Trials. Fifty athletes were chosen as members of the All-Marine team for the Warrior Games.
text size A A A May 17, 2011 The U.S. Olympic Training Center in Colorado Springs is hosting 220 servicemen and women who are wounded, injured or ill this week for the second annual Warrior Games.

"We have the Army, the Navy, the Marines, the Air Force, the Coast Guard and Special Operations Command all participating," says Charlie Huebner, chief of paralympics for the U.S. Olympic Committee.

Huebner says a primary goal of the games is to encourage people with disabilities to be physically active.

Some of the athletes are soldiers you've heard a lot about — injured by a roadside bomb or another combat-related injury. Others are accident victims or suffering from an illness.

In sitting volleyball, the net is low so that it touches the ground. And the players don't use wheelchairs, like in basketball — they sit on the floor and propel themselves however they can.

"Everybody's got different injuries," says Savage Margraf, 24, with the Marine Corps sitting volleyball team. "Some of the guys are double amputees, some are single amputees below the waist.

This is actually a sport where having legs is a disadvantage because they get in the way.

- Savage Margraf, a member of the Marine Corps sitting volleyball team
"This is actually a sport where having legs is a disadvantage because they get in the way," Margraf says. She is one of the few team members who still has both arms and legs.

Margraf suffers from traumatic brain injury (TBI). She says doctors attribute her TBI to two bad falls she took while serving in Iraq. One was from a watch tower on the Syrian border.

"I was helping get a 50-[caliber] barrel down — it's a machine gun," Margraf explains. "We had to change out the barrels because there was a sand storm. As I was coming down the stair, the second stair from the top broke and I fell."

Now Margraf says she has trouble with her vision. She was medically retired from the military in 2008 at 21 years old. Many of those participating in the Warrior Games are young.

Teammate Jese Schag, 21, had his right leg amputated after a motorcycle accident in 2009. He played sitting volleyball in the first Warrior Games last year.

"It's all about speed, and you've got to have good hands," Schag says. "You've got to be able to react — put your hands on the floor and then bring them up to get the ball."

Margraf says the competition is fun, but she's really here for inspiration.

"We have a swimmer who is a double amputee and blind," Margraf says. "How can you not come to this and leave with some sort of motivation and know that there are people that are way worse than you and they are trying?"

The Defense Department and the U.S. Olympic Committee organize the Warrior Games. Opening ceremonies were Monday. The sitting volleyball finals will wrap up the competition Saturday.
Posted by Bernabe at 9:32 AM