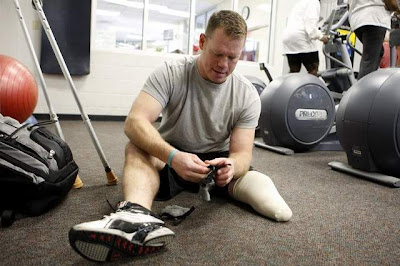 GREEN TWP. - A year ago, Scott Lane lay in a hospital bed, trying to cope with the loss of the lower half of his left leg in a traffic accident.

Saturday, he embarks on a 700-mile bike ride to raise money to send amputee children to a summer camp in Warren County.

The ride represents the culmination of a journey for Lane that can't be measured in miles.

He conceived of the idea for the 700-mile bike ride before he ever climbed onto an exercise bike at the Clippard YMCA branch in Green Township, as part of his recovery.

"The first day I got on the exercise bike, I could only ride two miles," said Lane, 41, of Green Township. "I thought, 'Is this going to be more than I can handle?' The second day, I rode it five miles. After that, I never had a doubt. I knew I could do it."

Lane and seven others will leave Saturday morning from Camp Joy in Clarksville in Warren County, the site of the camp for youths who have lost limbs, and arrive in Kansas City, Mo., a few days before the start of the Amputee Coalition of America's 2011 National Conference on June 7. The organization is a nonprofit group based in Knoxville, Tenn.

The annual Paddy Rossbach Youth Camp at Camp Joy, has hosted more than 500 children from 42 states and three foreign countries. It includes such activities as swimming, fishing and canoeing, dancing, archery, basketball, wall-climbing and arts and crafts.

Lane and three other bicyclists in his travel group have prosthetic legs. A van carrying their suitcases and other necessities will accompany them.

"Hopefully, we'll get a lot of media attention along the way," Lane said. "We're trying to raise awareness of the needs of amputees as well as raise money."

Lane said it's important for children who have lost limbs to meet others facing the same challenges.

"The camp can lighten their burden and give the kids an opportunity to be around other people like them," he said. "Sometimes, it's hard enough just being a kid, much less being a kid with an amputation."

Lane lives with his wife, Nicole, and their son and two daughters from his previous marriage.

On May 6 of last year, Lane was riding his motorcycle when a car driven by a 24-year-old mother of three went left of center on Old Colerain Road in Colerain Township and struck him. Toxicology reports indicated that the woman had illegal drugs in her system.

Although the accident cost him the lower part of his left leg, Lane asked the judge not to send the woman to prison because he didn't want her children to be without their mother. She received five years' probation and was ordered to enter a drug-rehabilitation program.

Lane, a plumber, has been unable to return to work.

"There's no way I can stand on that leg for eight hours or carry a water heater down the steps with a dolly," he said. "Cycling doesn't bother it because it doesn't put that much pressure on it."

Initially, learning to walk with a prosthetic leg was more difficult than Lane thought it would be.

"The first week, I was like a baby trying to walk," he said. "It was a struggle."

Lane has come a long way from those initial steps on his prosthetic leg. The months and months of hard work have paid off.

Camp Joy is a fitting name for the starting point of his 700-mile bike ride to Kansas City.
Posted by Bernabe at 9:21 AM