Lacey Henderson running all the way to London 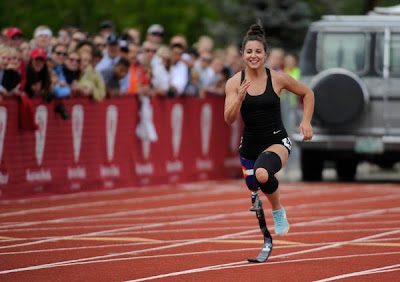 Cancer survivor and amputee Lacey Henderson has a berth on the U.S. Paralympic team for the London Games in 2012. (Andy Cross, The Denver Post )
Often, someone who doesn't know Lacey Henderson will spot the prosthesis replacing much of her right leg and blurt: "What happened to your leg?"

"I had cancer," Henderson routinely answers.

Henderson smiles and responds, "I'm not. I get great parking."

Three weeks short of her 22nd birthday, Henderson is on the verge of graduating from the University of Denver, where she majored in Spanish and minored in French and international health. Shortly after finishing four years on the Pioneers' cheerleading squad, she searched for a new athletic challenge this spring and last weekend locked up a berth on the U.S. team for the 2012 Paralympics in London.

The Denver native and graduate of Regis Jesuit High School needed to crack 20 seconds in the 100 meters in an official timing format to qualify for the U.S. team in the women's "T42" Paralympic classification, for athletes with single-leg amputations above the knee. She did so at the state high school track and field meet in Lakewood last weekend.

At Jeffco Stadium on Friday, she ran in the Paralympic exhibition 100 meters, but clipped her "racing" prosthetic with that of the boy in the next lane. After falling, Lacey got up and finished. The next day, she tried again in the Special Olympics 100 at the same meet. Her time was 19.98 seconds — two one-hundredths under what she needed.

It was symbolic. When she gets knocked down, she gets back up.

"I don't really have time for the cancer to come back at this point, so I'm feeling pretty confident," she said at DU's Driscoll Student Center. "It really wouldn't work with my schedule."

"Tired of being sick"

When Lacey was in the fourth grade, the diagnoses were that she had baker's cysts or, simply, "growing pains." Doctors then detected a tumor in her right knee. It was a soft-tissue synovial sarcoma, rare and found mostly in adult men. The survival rate is considered low, but it's so rare there isn't a huge sample. The most famous victim was actor Robert Urich, who died at age 55 in 2002.

Chemotherapy made Lacey violently ill and didn't seem to be working on the sarcoma. As doctors discussed the options with her and her parents — Linda and T.J., a longtime area high school track coach — the major one was amputation.

"I just wanted to be a normal person again and go back to school and I was tired of being sick," Lacey said. "So I said, 'Take it, I don't want it.' "

The amputation came in the spring of 1999. She also had a spot on her lung, but the chemotherapy zapped that.

"May 19 was my 12-year anniversary of being cancer free — and one-legged," she said. "I've been lucky. It has brought so many amazing things into my life, it has given me so many opportunities and so many gifts."

In early 2003, though, she was the target of harassment in her eighth-grade year at Hill Middle School. Some of it was vile or threatening online postings. Some of it was direct taunting about her prosthetic.

"It started off as people pretty sure just being uncomfortable with the leg," she said. "Towards the end, it was girls that just didn't like me."

In biology class, several girls placed remains of dissected frogs in her backpack.

Her parents moved her to Dora Moore School. The next year, she uneasily started at the girls division of Regis Jesuit, but discovered she loved it. "It was like going to camp for four years and you become close to your classmates," she said.

She was a cheerleader at Regis Jesuit, then at DU, doing all the athletic and acrobatic stunts. "I would have to watch for a while to see how people did (new routines)," she said, "and then I'd say, 'OK, this leg of mine might make me take a little bit longer, but I'm going to figure out how to do this if it kills me.' "

Denver attorney Julie Warren was DU's cheerleading coach during Lacey's stint on the squad. She admitted she wondered before Lacey's tryout about her physical capability and safety. "Then, probably within 10 minutes, I knew it was a nonissue," Warren said. "She had been so physically active during her youth and high school years, and prepared herself to do these physically challenging moves, she fit right in. That inspiration happened from Day One of meeting her.

"It was never a question of her not being able to do something the other girls did. That was incredibly impressive and a credit to her mental power and tenacity."

Click here for more of the story.
Posted by Bernabe at 11:27 AM