11-year-old Alabama boy, whose legs were amputated at birth, runs, skateboards and competes in baseball 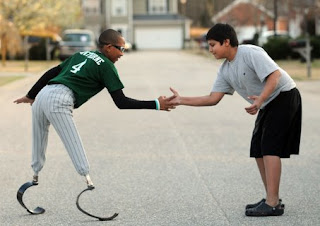 Hasaan Hawthorne's take on living as an amputee surprises a lot of people.
"I think it's funner having prosthetics than real legs because you get to do more stuff," said Hasaan, 11, a fifth-grader at Valley Intermediate School in Pelham.

He has shared his philosophy with a substitute teacher whose husband was getting prosthetic running legs, and a student whose grandfather was undergoing amputation.

"I like to inspire people and help people," said Hasaan (pronounced huh-SAHN). "I don't like to see people sad, I like to cheer people up. I'm just like other people, just with different legs."

Hasaan has been part of two championship youth baseball teams and an all-star team with able-bodied children. He excels in track and field for kids with disabilities.

Hasaan was born without shins, a condition called tibial hemimelia.

His parents, Demond and Felecia Hawthorne, reeled from the medical choices for their day-old son.

"We had never had such an experience, being first-time parents," Felecia said. "It was pretty hard."

The main options: Allow Hasaan's legs and feet to grow, knowing he would require a wheelchair, or amputate his feet and legs through the knees.

Amputation would let him sit at a school desk and walk with prosthetics.

At 4 months old, Hasaan had the surgery. As a youngster, he moved around using Tonka trucks and push cars.

Hasaan got his first prosthetic legs at 14 months, and it wasn't long before his athletic side began to emerge, particularly in baseball -- a shock to his football-loving father.

"I didn't even think about sports," Demond said. "He had a pair of walking legs, strictly for walking. Just walking in them is supposed to use the same energy we use to run."

By 4, Hasaan was running.

"At first it was hard, so I learned to skip and jump," Hasaan explained. "Sometimes when you jump off, the (prosthetic) feet turn."

At 5, Hasaan said he wanted to try out for baseball, first through the YMCA and then with Pelham Youth Baseball.

"I wanted him to prove he could play with them and not feel he wasn't good enough," Demond said. "But when he started playing, he was advanced for his age."

Hasaan could balance while batting and fielding, earning him spots playing first base and third base. He even helps his younger brother, Chase.

In 2007, Hasaan qualified for a grant from the Challenged Athletes Foundation for a set of curved running legs. The legs, which cost tens of thousands of dollars, increased his speed and improved his baseball skills.

"I like that you get to make a bunch of friends and you get to run," Hasaan said about playing for the Pelham Panthers. "I think able-bodied sports are more of a challenge. I just try to catch up with everyone else and impress my coach."

Some of the hardest moments for the Hawthornes are the stares and the pity.

Mother, father and son have all overheard adults and children making fun of Hasaan with names like Robokid or wild stories about train accidents taking his legs.

"We teach him that life is not fair and to have faith in God and trust in God," Demond said. "We don't want Hasaan to rely on us to take away the bad guys and make the bad stuff go away. We want him to live a proactive life on his own."

The youngster loves a challenge, and his spirit is often a reminder for his parents and others who know him. Hasaan confidently plans to be the first above-the-knee double amputee to play college baseball, then play for the New York Yankees, like Derek Jeter. He expects to own a Corvette and retire from sports as an orthodontist.

"It's easy as you get older to set limitations, and he provides an example that maybe we shouldn't put these limits on ourselves," Demond said. "We try to instill in Hasaan as he grows that God has made him for a purpose, and God doesn't make mistakes. At his age, Hasaan has probably made more of an impact on people's lives than I will ever make."

click here for more great photos.
Posted by Bernabe at 10:53 AM