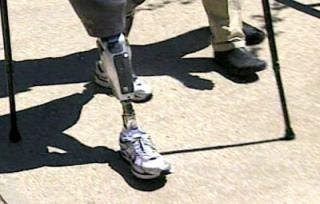 WASHINGTON - It's an exciting new day for the more than 800 war veterans who've lost their limbs in combat. Thursday, the U.S. Army rolled out a new generation of the world's first battery-powered artificial knee to make walking a lot easier.

This is version two of the world's first and only battery-powered artificial leg, designed to restore dignity, mobility and independence to these soldiers who've lost the ability to walk while fighting for their country.

The new one's smaller, three pounds lighter and smarter; it learns while you walk.

Lt. Colonel Greg Gadson says it feels a lot more natural but walking with battery-power takes some getting used to.

An Iraq war veteran, Gadson said, "It's sort of like if you were driving a school bus and someone put you in a sports car. You know, you still know how to drive, but it's quite a different feeling."

He lost both legs to a roadside bomb in Iraq two years ago, leaving this former West Point football player to re-learn how to get from point A to point B.

After just a few days, he can walk a mile. Balance is still a bit of a challenge. What's tough: coordinating what you feel with what you see while walking and getting used to being so far off the ground.

"I can already see myself doing things that I would normally not do, like maybe I might go shopping now, and browse," Gadson said.

Certified Prosthetist Michael Corcoran said, "For him, it's a long way off the ground, tough feeling, like falling off a table."

Gadson is the guinea pig for this new prosthesis that could be ready for amputees in a year.

"He's been a leader on the field, a leader in combat, now a leader in rehabilitation," Lt. Col. Paul Pasquina, M.D., of Walter Reed Army Medical Center, said.

Leading the way to for America's wounded heroes, step by step.

(Copyright NBC Newschannel, All Rights Reserved)
Posted by Bernabe at 10:00 AM