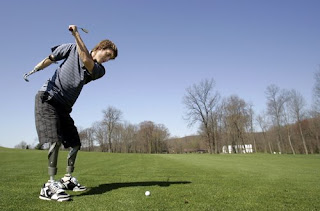 Cameron Clapp 23, of San Luis Obispo, CA uses one arm to hit with his iron from the fairway at the Annual Amputee Support Golf Outing at Wedgewood Golf Course in Coopersburg on Friday, April 24, 2009. Cameron is a triple amputee and has been competing nationally in swimming, running and golf events. (RICH SCHULTZ/SPECIAL TO TMC / April 25, 2009)

Cameron Clapp ambled toward the tee, took a moment to set up his stroke, then blasted the golf ball down the fairway.

''Nice shot, Cameron,'' the other members of his foursome cheered. ''Nice.''

''It's good to get out and be physically active,'' Clapp said a little bit later. ''This is fun. I'm just out here having a good time.''

With that he returned to his golf cart, using his left hand and the pincers where his right one used to be to put his putter in the bag, then the microprocessors in his prosthetic legs to work the vehicle's pedals.

The 23-year-old Californian with a young surfer's drawl and a veteran runner's determination has been a triple amputee for nearly eight years, having lost both legs and his right arm in a train accident.

Since then, he's taken up golf, participated in races and traveled the country speaking to, and on behalf of, his fellow amputees.

''I have obviously a ... disability to most people,'' said Clapp, who's acted in TV shows such as ''My Name is Earl'' and is a spokesman for a prosthetics company. ''But to me, I don't see myself as having a disability.''

The local amputee support group has dozens of members, several of whom act as peer counselors, visiting area hospitals and other places to meet with new amputees and help them adjust.

Kim Bartman, the Lehigh Valley Hospital nurse who runs the group, said many people who've lost a limb suffer as much emotionally as they do physically.

Many amputees struggle to get insurance companies to pay for prosthetics, she said, especially the more expensive ones that allow easier movement.

The money raised at Friday's tournament won't be enough to cover the cost of most prosthetics. Bartman said the group has used its reserves for things such as helping amputees cover the co-pays needed for services under many insurance plans.

The tournament has other benefits, too.

Interest in the annual golf outing has grown since its inception. So many people tried to register this year, Bartman said, that she had to turn away about 50 -- the 27-hole course only allows 200 to play comfortably. Dozens of the players were local amputees.

Ricky Kemp, a Bethlehem Township man who lost part of his left leg five years ago in a motorcycle accident, said seeing so many people come out to support local amputees was encouraging.

He also said it's crucial to know there's a support system out there for people who've lost a limb.

"When I woke up in the hospital and ... saw my leg was gone, I felt alone at the time to go through my ordeal," he said. "To have a support group to help you through it -- it's amazing."
Posted by Bernabe at 10:06 AM