Paralympic athletes teach area amputees a better way to get around 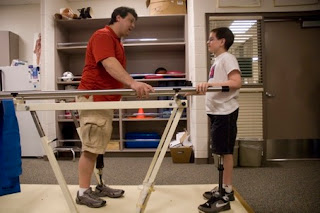 Seven years ago, doctors amputated Dalton Roberts' left leg above the knee as a result of bone cancer. Since then, the 12-year-old Beaverton boy has walked with the help of a prosthetic limb. But walking isn't enough; Dalton wants to run and jump.

So Dalton spend Wednesday afternoon at Delta College with about 60 other amputees who attended Amputee Walking School.

Taught by Paralympic track and field gold medalists Dennis Oehler and Todd Schaffhauser, the participants learned new techniques to strengthen their lower muscles and get a better handle on controlling their prosthetic limbs. 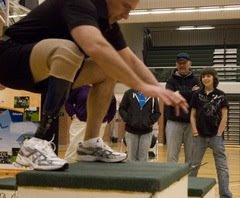 Rebecca Craig | Times Photo
Paralympic track and field gold medalist Dennis Oehler demonstrates for 14-year-old Tyler Adams, right, how he can balance in a squat while wearing a prosthesis."Unfortunately, amputees don't get enough time in rehabilitation," Oehler said. "We needed to do something to develop on-going training."

The additional training was helping Dalton, said his father, Tom Roberts, who brought his son to the training session to "build strength and walk better and more efficiently."

Saginaw-based Michigan Orthopedic Services sponsored the event, which brought in participants from ages 12 to 72.

Oehler and Schaffhauser, both of Long Island, N.Y., have taught their class throughout the world and have instructed more than 10,000 lower extremity amputees.

Scott Baranek, a certified prosthetist with Michigan Orthopedic Services, spearheaded the event. A Bay City native lost his leg in a 1994 motorcycle accident, Baranek wants to bring resources to local amputees who may not have had enough physical therapy.

"It's a two- to three-year journey to get full recovery after a limb loss," Baranek said. "It's lucky if patients get four months of physical therapy." 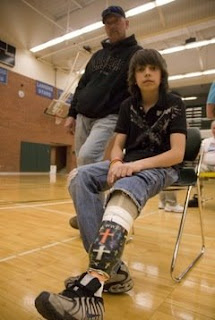 Rebecca Craig | Times Photo
Tyler Adams, 14, lost his foot in a boating accident in August. He and his parents, Scott and Jolene Adams, and his 13-year-old brother, Joseph, turned out for the session.Once therapy stops, Baranek said there is a tendency for amputees to plateau, content to get by walking with a walker. He is hoping to "raise the level of awareness and expectations of patients and healthcare providers."

The most important issue is developing strong muscles so amputees can walk without a cane, or even run, Baranek said.

"Strength training is the key to using the proper muscle groups and ambulating properly," he said.

Kim Peake, referral development manager for Michigan Orthopedic Services, said the company tries to give patients ways to improve their abilities after the therapy ends.

"What we try to do is instead of making an artificial limb and saying 'see you later,' we give continual care," she said.

"We'd like to make this a monthly event, an actual program these people go through and each time they'd come out they'd learn and grow and progress," he said.

"Scott really recognizes what we're trying to accomplish with this," said Oehler, adding that he'd like to see the program become a monthly event. "Going monthly gives (amputees) opportunities to learn more and progress. It's good, exciting stuff."

Tyler Adams, 14, son of Scott and Jolene Adams of Sterling, had his left leg amputated below the knee on Aug. 5, following a boating accident. At Wednesday's class, he worked with his brother Joe, 12, to better hone his strength and balance.

"He's doing exceptionally well," said Jolene Adams. "He runs, plays second base in baseball, plays basketball, rides his bicycle and jumps on his pogo stick."
Posted by Bernabe at 9:17 AM