Flight of heroes: Soldiers who are gliding back from war's horrors 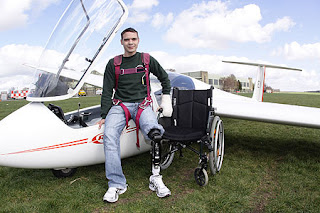 Brave soldiers maimed on the battlefield are being restored to physical and mental fitness - by becoming glider pilots.

The MoD is providing the flying lessons to boost their morale by showing them they can be just as good as ablebodied exponents of the sport.

And the courses are so successful that many of the heroes now have the skyhigh aim of returning to serve their regiments in world trouble spots despite shattered limbs and even amputations.

Major Martin Colclough, who runs the Battle Back programme, said: "Gliding is an incredibly liberating activity and so is perfect for helping the lads recover.

"The aim of rehabilitation is to restore their ability to serve and, judging by the feedback I'm getting, this innovative approach is proving very worthwhile."

In our exclusive photos from Wiltshire's Army Gliding Club, Gunner Mark Stonelake is typical of the guys who are intent on overcoming their handicaps.

The 24-year-old lost his left leg when the vehicle he was driving was blown up in Afghanistan last December. But Mark, from Hemel Hempstead, Herts, is desperate to rejoin his comrades at 29 Commando - and firmly believes gliding will help him achieve his goal.

Despite having to learn the basics on a prosthetic leg, he said: "You get a real buzz from being so high with no engine to rely on. I'm so glad I've had this opportunity to learn a new skill.

"It breaks up the routine of rehab and has given me something completely different to concentrate on. So it's speeding up the recovery process."

Mark, who also shattered his jaw and cheekbones and lost three teeth in the horror blast, admitted: "It's not going to be easy but I'm now set on getting back to my regiment with the lads. .

"When I finally came to after the explosion, I was lying in a hospital in Birmingham. I had absolutely no idea why, or what I was doing there.

"I remember trying to find my boots - and then being told I'd lost my leg.

"But the support from everyone has been overwhelming ever since - and I can't wait to get involved again."

Lance Corporal Daniel Whittingham, 23, smashed almost every bone below the waist when he was also caught in an Afghanistan explosion in January.

But despite his broken pelvis, coccyx, tibia, fibula, both ankles and heels, he remains admirably upbeat.

Taking a break from his Alexander Shleicher K21 glider, he grinned: "I guess my Olympic sprinting hopes are over. But the gliding has shown me there's plenty of other stuff for me. It's brilliant as you can compete with able-bodied gliders."

Daniel, of Nottingham, who serves with 11 Regiment the Royal Logistics Corps and has had 10 operations, added: "It's great to get out of the ward.

It can get boring even though the nurses are great. So being up in the clouds and learning something new at the same time is a huge bonus. I'm really enjoying myself."

Major Allan Tribe, of the Army Gliding Association, said: "We have to adapt each of the planes to suit the body of each particular injured soldier. But once they have been fully trained, there's no reason why they can't take on anyone."
Posted by Bernabe at 9:56 AM