THEY'VE duelled with death, been blown up by bombs, and survived catastrophic injuries.

But now a life on the ocean BRAVE has inspired an incredible new purpose and passion in a remarkable bunch of maimed British hero soldiers.

Today eight of this courageous band of brothers take on the world-famous Cowes regatta. But as they prepared to battle the Solent, they told of the historic sea challenge that turned their lives around- the first-ever ALL-AMPUTEE sailing crew to race across the Atlantic.

Private Chris Herbert, whose left leg was blown off by a roadside bomb in Iraq in 2007, said: "I never thought we'd make it. There were only 12 legs between the 13 crew members!

"Looking around I thought, 'What are we going to do if someone needs to climb the mast?'

"I found out the next day-when I was ordered to climb it! But when asked I didn't think about it, I just DID it.

"And that's how all the race was. No one cared about not having both legs, or even any legs. We just got on with it."

That's the incredible spirit and fellowship created by remarkable new charity Toe In The Water, dedicated to rehabilitating our injured servicemen by getting them out on the waves.

The determined crew entered last November's Atlantic Race Challenge from the Cape Verde Islands off West Africa to Barbados. And not only did the lads go the whole 2,000-mile, 10-day distance, they came THIRD! 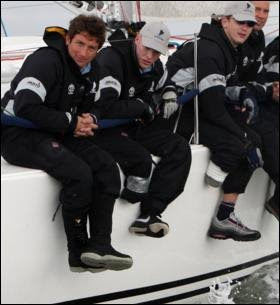 Chris's crewmate Lance Corporal Johnathan Lee, 26, never imagined he'd go on a sailing boat. In fact after losing his right leg driving into a Taliban minefield in November 2007, he never thought he'd do ANYTHING ever again.

But the rookies' transatlantic dash aboard the 65ft Spirit of Juno changed all that.

"It was one of the most exhausting things I've ever done," Johnathan told us. "But it gave me incredible freedom. I did the whole trip WITHOUT my prosthetic leg as I found it easier to manoeuvre around the boat without it.

"It didn't hold me back a bit. I still got stuck in. It's all about the teamwork."

Buddy Chris, from Barnsley, South Yorks, had never been on a boat either, until last year. 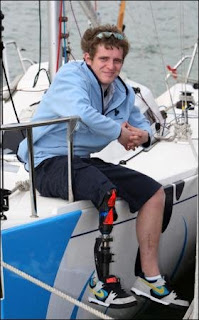 He laughed: "But I got bitten by the bug and I love it." He loves it so much he's now taking a degree course with the UK Sailing Association on the Isle of Wight, aiming to become an elite sea captain.

But it's heartbeaking to hear how Chris's new-found joy was born out of appalling tragedy. His Yorkshire Regiment Land Rover blew up in Basra in February 2007, crippling him and killing his best mate Luke Simpson, just 21.

As Chris lay injured in the baking sun for two hours he was so convinced his fate was sealed that he even got out the 'death letters' he'd prepared for his loved ones.

He was just 20 minutes away from bleeding to death when he was evacuated to medical help. 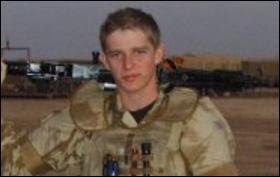 Watching him today-just two years on-pulling to release the boat's mainsail before leaping nimbly across deck to shift its direction, you'd never believe he now lives with such a cruel disability.

It's the same story of true grit with comrade Johnathan, from Newark, Notts.

When his vehicle was blasted in Afghanistan, it overturned and when he gathered his senses, Johnathan realised he couldn't feel his right leg.

"I kept calm, concentrated on staying alive, and waited to be rescued," he said. "I took out my phone, turned the video camera on, and said goodbye to my mum.

"I wasn't scared. You're only ever scared of the unknown-and I knew that I was going to die." 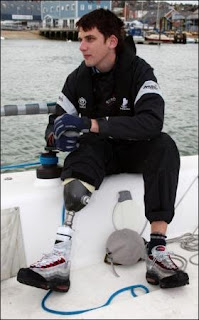 Johnathan was eventually saved by a daring rescue mission into the minefield.

But the doctors' prognosis was poor-the leg would never recover.

Johnathan recalled: "All I said to them was 'Give me three days to say goodbye to it, and then it's yours.' "

And as he climbed aboard the boat in Cowes this weekend it was obvious his injury has definitely not dampened his zest for life. 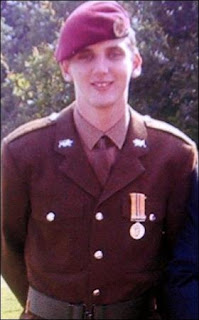 "Life's too short," said Johnathan. It's all about getting on with it and making the most of it. And coming down here to sail with these world-class sailors has proven that to me. It's an amazing experience." 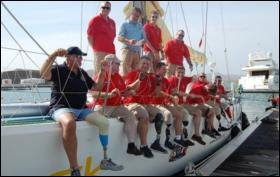 Andy, 40, from Farnham, Surrey, lost the use of his right arm three years ago in Afghanistan when a round from an AK-47 assault rifle tore a horrifying four-inch hole in his bicep.

"I got so angry being in Headley Court military hospital away from the troops," he said.

"After being a Para for 21 years, I couldn't cope with not being part of a team. I got very depressed."

But, like the others, he found liberation at sea.

"The people we were sailing with didn't care about our disabilities, they just wanted to race and win-and the feeling was immense.

"When we got off the water, no-one asked how my arm was, all they wanted to know was how the boat sailed and what the conditions were like.

"She just couldn't believe the transformation back to my old self in such a short time. And neither could I." Marine David Martin-shot in the leg in Afghanistan-is grateful to Toe In The Water, too, and admits it's a pleasure just to be back on board a boat that's NOT heading into battle.

"I'm used to the water but it's nice to be on it knowing that the only 'unfriendlies' out there are just RACING against you," said David from Ashford, Kent.

On Friday David and the rest of the determined crew were joined by double Olympic gold medallist Shirley Robertson, OBE.

She took the helm for a while and told us: "It's a privilege to sail with these guys. They're amazing people, all so enthusiastic and wanting to race as well as they can.

"There are definitely some future Paralympians here."
Posted by Bernabe at 3:17 PM