Nothing keeps boy from finishing triathlon 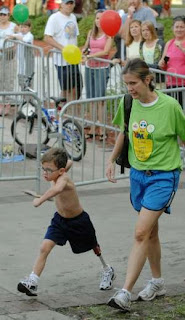 He swims, bikes, runs in event with one leg and prosthetic, parental help
By Roger Bull Story updated at 12:01 PM on Monday, May. 4, 2009

Tim Houston entered his first triathlon Sunday morning, and he finished every bit of it - the swim, the bike and the walk/run. His mother wasn't so sure how he'd do on the bike ride, his prosthetic leg has been chafing him a bit. But he made it all the way from start to finish.

This is the first year the YMCA has held the First Coast Kids Triathlon, and there was no shortage of kids. Officials had to shut down registration after about 501 of them signed up. Tom Gildersleeve, one of the organizers, said that the event is already the third largest children's triathlon in the country. 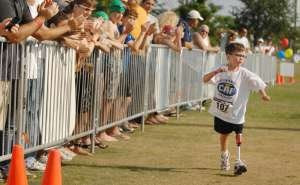 The athletes and their parents gathered early Sunday morning at the University of North Florida. They wheeled their bicycles into the fenced transition area, parked them and went out to the big tent to wait for instructions.

Tim walked most of the way there, without his prostheses, but pushing a small walker he sometimes uses around the house. He's used to this. He lost his left leg at mid-thigh to a blood clot when he was 21 days old. He got his first prostheses at 16 months, but recently received a new one through the Challenged Athletes Foundation.

He'd already been swimming for a couple of years, but his new leg gives much more flexibility and stability, his father, Jim Houston, said. Tim used to be bothered by all the attention, by the staring, Dad said, but he's getting better about that.

The task in front of Tim and all the other 8-and-younger athletes was this: Swim 100 meters in the pool, ride 3 miles on a bicycle and then finish with a half-mile walk/run. 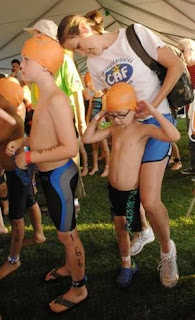 His mother, Carolyn Houston, carried him into the aquatics center, placed a swim fin on his right foot. And there he sat waiting on the bleachers, just another kid in a sea of goggles and orange swim caps.

When it was his turn, he dropped into the water and off he swam passing, that's passing, other swimmers fairly easily. From there, Mom took him to the locker room where she helped him get his leg, the one he calls his Star Wars leg, on. He walked to the transition area, got on his bike and off he went again, with Mom running alongside.

So many children out swimming, biking and running meant that parents were just about as busy. They ran from spot to spot, either to get a few more photos, a few more seconds of video or to holler important tips, like "Go! Go!"

As the young contestants returned from their bike ride, some still were sprinting, as they had every stroke, every step, every pedal of the way. Others quite clearly had had enough of the whole thing and were just barely moving along.

When Tim finally returned from his bike ride, he had a full escort. Not only was Mom still running alongside, several of the adult riders who had been going back and forth to keep an eye on things, rode alongside, encouraging him to keep going.

He finished his ride, gave Dad a quick kiss and headed off down the sidewalk lined with people who cheered him on. He had been at it for about an hour, and he was slowing down a bit. But he kept moving. 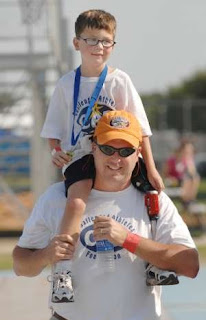 Tim's older brother Brett, who turns 8 next week, already had finished. It wasn't too hard, he said, though he confessed he did have to walk a few times on that final leg.

Brett keeps an eye his brother and is pretty protective, his father said. But Brett did admit that sometimes Tim is a bit of trouble. (You know, little brothers.)

Mom left Tim to go on his own for his final dash to the finish line. Brett and Dad were there, so were dozens of others who gathered at the fence to cheer on that particular testament to the human spirit in the form of a 40-pound boy with glasses.

Tim got his medal, a bottle of water and whole bunch of congratulations.

"He can do anything he wants," Dad said. And Mom Carolyn, who ran with him most of the way, noted that Tim was now a triathlete.