By David Saleh Rauf - Express-News
When Mona Patel and Leslie Tramer started organizing a group of amputees pushing a proposal that would require private health insurers to pony up for at least 80 percent of the cost of prosthetic limbs and repairs, she knew they'd face a tough battle. 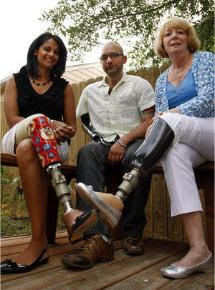 Lawmakers, health care providers and small businesses opposed to any insurance mandate would be lined up to kill the legislation. So Patel, a 36-year-old amputee and founder of a San Antonio support group for people who have lost limbs, and her “partner in crime” Tramer devised a strategy: Maintain a strong visible presence at the Capitol by getting as many amputees and their stories about fighting with insurance companies in front of lawmakers and their staffs.

Their ambitions were undeterred by physical handicaps: One day before the full House was scheduled to vote on the bill, a small group of amputees hit the offices of about 140 lawmakers. They passed out fact sheets and spoke about the more than 30,000 Texans who rely on private insurance to help pay for their prosthetics.

“We got a majority bipartisan vote the next day,” Patel said.

It was the beginning of an aggressive grass-roots lobbying effort that would culminate five weeks later when House Bill 806, a measure that orders private insurers to offer coverage for prosthetics equal to what Medicare provides its members, was sent to Gov. Rick Perry's desk. With little fanfare, Perry signed the bill into law earlier this month, making Texas the 16th state to enact what amputees call “prosthetic parity.” The bill takes effect Sept. 1.

“This is huge in the prosthetics world,” said Kim Rice, the mother of a Wetmore Elementary fifth-grader with a prosthetic leg that is fitted and maintained for free by the Texas Scottish Rite Hospital for Children in Dallas.

Rice was forced to find prosthetic options outside of San Antonio because her family's health insurance capped such coverage at $2,500 a year — thousands less than what it was going to cost in upkeep for her son's prosthetic every year.

The caps on prosthetic coverage that the Rice family faced are typical, activists say. The effect: Amputees are commonly left scrambling to find funding for prosthetics, ranging from $8,000 to $80,000, that they say help them return to fully functioning roles in society.

But with every insurance mandate passed by the Legislature, premiums in Texas continue to rise, critics warn. Texas' insurance plans already are subject to 55 mandates, making the Lone Star State one of the five most heavily regulated states in the country, according to the Texas Public Policy Foundation, an Austin-based conservative think tank.

Activists for HB 806 say the prosthetic mandate will increase the cost of premiums by about $4 a year, but opponents say any mandate will harm consumers by making insurance more expensive. Aside from the prosthetics bill, at least three other insurance mandates passed this session. They're waiting for Perry's signature.

“If you add up all the mandates, you see the impact,” said Jennifer Ahrens, executive director of Texas Association of Health Life Insurers.

Amputees pay those premiums, too. And when they lose a battle with their health insurer over prosthetics, some turn to the state for assistance.

Albert Garcia, for example, had his arm surgically removed nearly three years ago after he was hit by an SUV on a Northwest Side street. He spent the next two years battling with his insurance company until he finally asked the state for help to pay for his $80,000 motion-sensor-controlled arm. “It was basically the taxpayers paying for my prosthesis when it should have been my insurance company,” he said. “That's why HB 806 is so important.”
Posted by Bernabe at 9:59 AM