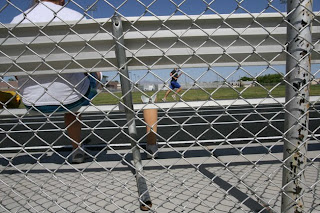 She nearly quit the squad five minutes into her initial workout as she labored during warm-ups, jogging twice around the track for a half mile.

Her teammates moved into specialized training, but Harding was still struggling with one of the sport’s fundamentals — running.

As an infant, Harding had her right leg amputated below the knee and has walked with the help of a prosthetic limb her entire life. Her leg was damaged at birth.

Now a freshman, she had avoided playing sports. She cried uncontrollably both times her father tried to take her to a youth soccer practice when she was younger. But some friends who live in her neighborhood were on the track team and convinced her to give it a try.

“Everyone has been so encouraging toward me. My friends told me how laid back track was and how there were no cuts, so I would be on the team,” she said. “I decided I will try whatever. If I couldn’t run, I could throw.”

Harding, who competes in the shot put and discus, jogs in the middle of the pack during the warm-up run. She smiles and talks to her teammates about school and everything else teenagers gossip about.

Harding didn’t score any points for Boulder City this spring, but if you talk to most of her teammates, they say her participation alone is an accomplishment more impressive than winning a meet.

“It’s fun to see her out here because she never wanted to do sports before,” said teammate Amber Smith, who along with her twin sister, Ashley, have been friends with Harding since she moved to town when she was 3 years old. “I’m glad she stayed with it.”

Harding said she remembers looking down at her blue and gold uniform at her first meet and just being thrilled to represent her school.

“She comes out and always tries her best,” Boulder City coach Steve Roe said. “Everyone enjoys her. She is a good Boulder City kid.”

One of the disadvantages of competing with a prosthetic leg comes in twisting and turning to throw the discus. Having no ankle to turn on has made things more difficult, Roe said.

Harding’s personal best throw in the discus is 48 feet, 10 inches, which is about 18 feet farther than her throws at the beginning of the year. She improved nearly five feet in the shot put with a top throw of 18-9.

Roe said Harding’s scores are comparable to most girls in their first year and said her petite frame and 5-foot-1 height are more limiting than competing with a prosthetic limb.

“She can become competitive for us,” said Roe, who figures Harding will be able to score points for the Eagles by the time she is a junior.

Harding is full of stories from her inaugural season.

One she chuckles while telling comes from a practice before her first meet. Roe let the girls test themselves in a variety of events and Harding attempted the hurdles.

She fell while trying to clear the first hurdle. As teammates looked at her, and some rushed over to see if she was injured, Harding started laughing.

She has always viewed wearing a prosthetic with humor. She knows some people stare at her at school and on the track, but she does not let it bother her.

“I feel like I have a normal life,” she said. “I always stay upbeat and positive.”
Posted by Bernabe at 1:37 PM