Surfer missing leg is 'Amp'd' to paddle out again 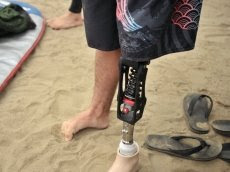 Shane Lincoln stood on the sand at San Onofre State Beach, practicing his pop-up on a surfboard before getting into the water.

He pressed down on his left leg to see how the shocks were working, fidgeting with his screws to add more spring to his step.

It would be much different then when Lincoln, now 17, started surfing as a child.

Back then, he had both his legs intact.

Lincoln on Saturday morning went out for a surf session for the first time since having his left leg amputated nearly 3 years ago, joining a group of other amputee surfers for a program called "Amp'd."

The outing was organized by Amy Ginsburg, an employee at Hanger, an Orange County based-prosthetics company. The surf groups – who have been meeting up occasionally since August - are made up of patients, but soon Ginsburg wants to open the surf outings up to others. 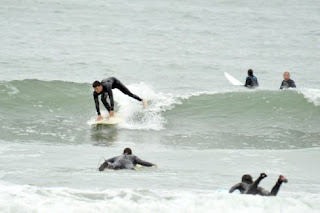 "It's just a cool way for them to find something else they can try, and be good at," she said. "I like to get people back to doing what they used to do."

Surfing with other amputees allows them to share tips, and to see that missing a limb doesn't mean you can't do what you love.

Before hitting the water, Wayne Tanimine chatted with Lincoln to share his surf technique. 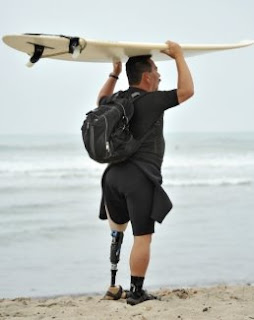 Tanimine, 55, takes his prosthetic off and leaves it on the sand, riding waves on one leg in a crouched position.

Tanimine lost his leg in 1975 after a bout with joint cancer. It took him about 10 years to get back in the water, and these days he can be found surfing just about every day.

He has to worry about things like not slipping on rocks while walking on one leg in and out of the water, or what time high tide hits so his leg doesn't get swept into the ocean.

Lincoln decided to do it different than Tanimine, leaving his sports prosthetic on while in the water.

"I know I'm not going to be shredding, but no matter what, I'll be in the water, so it will be a good day," Lincoln said.

Lincoln's injury happened 2 years, 8 months, and 29 days ago, when a drunk driver smashed into him as he helped push a friend's car up a hill in Newport Beach after it broke down.

"I just heard (my friend) yell 'look out'!" the former Newport Harbor High student recalled. "I was totally frozen. I just saw headlights."

His leg was mostly severed. A 4-inch piece of his femur was left in the street.

Doctors thought they might be able to reattach his leg. But after 38 surgeries and months of unbearable pain, he made the decision to have it cut off.

"I'd rather have a fake leg that works than a real one that doesn't. I just decided it was time," he said.

Life got tough after that. The pain was severe, and soon he was hooked to the pain medication – which then led to other drugs.

"It got rough, and I'd break down in tears," he said. "I was constantly in pain. I got in the mindset 'I'm not ever going to be able to do anything again."

After a long struggle, his family eventually had enough and sent him to rehab. Now, he's been off drugs for six months, and is slowly pulling his life back together.

On Saturday, he got a big piece of his life back: the thrill of riding a wave.

As he paddled out, his father Scott asked him if he wanted to give it a shot in the whitewash – where the waves are a bit more gentle – but Lincoln powered through to the outside sets.

After paddling for a few waves, he finally got into one with enough power to move his board forward.

He slowly put his hands on the top board to push his body up, but hesitated too much and lost balance, his board flying out from under him.

He got back on the board to try again.

On his next attempt, he was quicker – and in a quick second he was standing up and riding a wave, flying down the line.

His dad cheered from his surfboard.

"That was awesome," his dad said, as Lincoln went back out for more.

He grabbed his son's hand: "Just one of many, son."

After riding about five waves, Lincoln was done for the day, stoked on his accomplishment.

"It was sooo sick. I didn't think it would be that easy," Lincoln said. "It was epic."

Contact the writer: lconnelly@ocregister.com
Posted by Bernabe at 10:42 AM

these stories here, i tell u..very inspiring..
but one thing for sure, that bionic thing really not so popular in my country. Great if it is popular here.My late grandma got amputated on her right leg,..n this blog really reminds me of her..