Oscar Pistorius, the triple Paralympic gold medallist, will be the main draw in the athletics portion of the BT Paralympic World Cup in Manchester, at the Sport City Regional Arena, but lining up alongside the young South African in the 100m sprint will be the remarkable USA athlete Kortney Clemons.
By Gareth A Davies
Last Updated: 4:05PM BST 23 May 2009 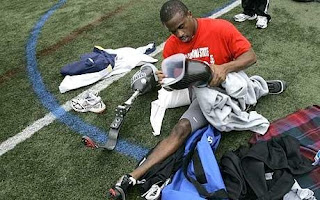 Speed king: US national Paralympic 100m champion Kortney Clemons Photo: AP
Clemons was the first Iraq war veteran to qualify for the US Paralympic team and compete at the Beijing Games after losing a leg in roadside bomb when helping a colleague in 2005. Clemons insists he is "living proof that you can accomplish anything".

On Feb. 21, 2005, Clemons, then 24, a combat medic in the 1st Cavalry Division, went to the aid of a soldier whose Humvee had been blown off a dirt road outside Baghdad by an insurgent's bomb.

Oscar Pistorius: Great Britain's support for Paralympians is the best
Soldier blown up as he rescued wounded colleagueHe was readying the wounded soldier for a helicopter evacuation when a second bomb nearby killed three fellow medics and blew away Clemons' right leg from above the knee. It was five days before he was due to be discharged from the army.

Six months later Clemons began running with a prosthetic limb, insisting he went through a period of "re-introducing myself to myself". Who knows the dark places a man must go to replace the physical loss, literally, and seemingly, the end of his active lifestyle?

Yet Clemons insists he searched his soul for the reasons that God would want to take his leg, and found solace in sprinting.

"I came to the realisation that he did this for a reason. He wanted me to make something more of myself. I had to lose my leg to find the real me."

A few months after that uplifting first run he claimed the US national Paralympic title in the 100m sprint. He failed to win a medal in Beijing, but the single amputee continues to improve.

The native of Little Rock, Mississippi, has always loved sports. Before joining the army, he played junior college football and in spite of being 5ft10 and 145lbs, was a formidable defensive back. He has shown the same inspiration as a Paralympian.

Also on the track is one of Great Britain's greatest Paralympians, Danny Crates, the Paralympic record holder at 800m is back in action after injury, and contemplating retirement, while one of Britain's rising track and field stars, Nathan Stephens, the world junior champion at shot, discus and javelin, also competes.

Stephens has already been a summer and winter Paralympian for GB despite having his legs amputated when he was run over by a train on his 9th birthday.
Posted by Bernabe at 10:54 AM