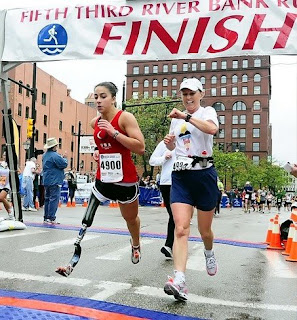 Elizabeth Stone always wanted to run. What was stopping her was not the will to do so, but the physical ability.

Born with only one leg, the 18-year-old Grand Rapids Christian High School senior has had a prosthetic leg since she was 4-years-old.

Then, three months ago, she had a running leg put on so she could compete in events like the River Bank Run 25K.

On Saturday, Stone crossed the finish line in the event she had been dreaming of competing in with an unofficial time of about two hours and 40 minutes.

"I feel pretty good," she said. "I had a little bit more energy at the end than I thought. I'm happy with the result. My goal was to stay under 3 hours and I did that."

Strangers befriended Stone throughout the event, cheering her throughout the course and offering such encouraging words as "You're my hero" at the finish line.

Since beginning to run with the new running foot about three months ago, the longest race Stone had competed in was a 15K training race.

"I'm really excited," she said. "It's been a goal. I've only been training for three months and I said I hope I'll be able to finish and compete in this and I did that. So I'm really happy."

With her first 25K under her belt, Stone has loftier goals in mind.

Having taken the first step in such a short period of time, she's confident she can strive to achieve loftier dreams.