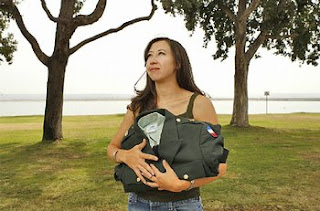 By Don Norcross, Union-Tribune Staff Writer
2:00 a.m. May 28, 2009
Michelle Bowman will carry the memory of her husband Robby along with her through her second Rock 'n' Roll Marathon. (K.C. Alfred / Union-Tribune) -

Michelle Bowman was expecting a delivery to her Fort Lewis, Wash., home. So when her doorbell rang early in the morning on Friday, April 13, 2007, she slipped on a robe, walked downstairs and peeked out the window.
When she saw two men dressed in Army uniforms, she knew.
Her husband had been killed.
“The only time the military comes to your doorstep,” says Bowman, “is if it's death.”
The chaplain and notification officer confirmed that Spc. Larry “Robby” Bowman had been killed by a roadside bomb outside Baghdad, Iraq.
Recalls Michelle, “I remember going upstairs, looking through my closet, my hands shaking, going, 'Oh God, Oh God.' ”

Come Sunday, Bowman, now 30, will join nearly 17,000 other runners, squeezed like cattle into corrals on the west side of Balboa Park for the 12th annual Rock 'n' Roll Marathon. She ran the race last year, finishing in 5 hours, 11 minutes.
There is an irony to Bowman becoming a marathoner.
Sitting in her Pacific Beach home, shooing two cats away from a visitor, Bowman says, “I'm not one of those people who (feel) running is my zen. I don't like running. I have to force myself to go out and do it.”
So why does she run?
Shortly after Bowman's death, his sister, Angela Sigmon, called Michelle. Sigmon and her husband were going to run a half marathon in Robby's memory. They wanted to know if Michelle would attend the race.
“Screw that,” said Michelle. “If anybody's running in memory of my husband, I'm in on that.”
They had T-shirts made in Robby's honor. On the back was a quote Bowman lived by: “Life has a taste that the sheltered will never know.”
Michelle wasn't much of a runner then. Two miles. That was her limit before training for that February 2008 half marathon. That's how far she used to run on Saturday mornings with Robby. He didn't like running much, either. But it kept him in shape for the Army's physical training. She still remembers their first run together.
It fell on her 27th birthday.
“I was dying,” she says. “It was pitiful. But he just kept encouraging me. 'C'mon, baby. You can do it.' ”
Inevitably during long-distance training there come times when the body rebels, longing to quit. Your feet ache. Your thighs throb. Your calves cramp. It becomes a mental game. And the mental game Bowman played during difficult workouts was to repeat her late husband's words like a mantra.
“C'mon, baby. You can do it.”

Michelle grew up in Perris, near Temecula. She moved to Lenoir, N.C., when she was 13and first saw Robby at a roller skating rink when she was 15.
“I saw him walk in across the room and I gasped,” says Bowman. “I grabbed my friend's arm and said, 'Who is that?' ”
She pauses, then adds, “It took me two years before he even had a clue who I was.”
They were friends long before the relationship turned serious. Near Thanksgiving 2003, more than nine years later, Robby returned home from his first tour of Iraq on emergency leave after his father died. Michelle happened to be visiting her family and attended the funeral.
“Our relationship changed after that,” she says.
On April 1, 2005, with Robby living in Fort Hood, Texas, and Michelle in San Diego, they eloped and were married.
When she thinks of her late husband, she remembers a man who was true to his Southern roots.
“He was just a good ol' Southern redneck, but totally proud of it,” she says. “I don't think I ever met anybody who didn't instantly take to him. He could walk into any room, not know a single person and walk out with a room full of new best friends.”
One of his favorite passions: barbecue.
“Literally, his favorite thing was to be on the grill,” she says. “He spent two hours the day before preparing the meat. And it couldn't be (a) gas (barbecue). Had to be charcoal.”
He was proud to be in the military.
“My husband loved being a soldier,” Bowman says.
She cried once during last year's Rock 'n' Roll Marathon, about 17½ miles into the race, where the course cuts through military housing near Mission Bay High. She saw military decals on cars, yellow ribbons, children running about in yards.
“I started crying,” she says, “bawling in the middle of the marathon.”
Bowman stayed in North Carolina for a month after burying her husband there. She chose to return to San Diego, where she had lived from 2001 to 2005.
“There was too much of him there (in North Carolina),” Michelle says. “For my healing process, I don't think I could be anywhere where I'd be surrounded by him constantly. San Diego was Robby neutral.”
Bowman has helped organize an annual run in her husband's memory in rural North Carolina. The first “Robby's Run,” a 5K, was held on April 13, 2008, the one-year anniversary of his death. The race has raised nearly $11,000. Bowman has targeted two military charities as beneficiaries. One focuses on military amputees and burn victims. The other focuses on mental health benefits for soldiers.
“She is nothing but an inspiration to me,” says Barbara Jane Braswell, Robby's mother. “If you've ever seen pictures of them together, they were very much in love. I love her to death.”

A few weeks before her husband died, Michelle and Robby decided that one day they would summit Washington's Mount Rainier.
Last August, on the day before her 30th birthday, with temperatures in the teens, Michelle completed the two-day summit. She walked into the crater, dug a hole with a pickax and buried a set of Robby's military dog tags. Then she removed a vial she had draped around her neck and spread some of his ashes.
“I was a sobbing mess,” she says. “I've done a lot to honor his memory, and to keep that spirit he had alive. I've also moved on with my life.”
She works as a manager at an upscale restaurant and wine bar. She's in a serious relationship, talking marriage and buying a home.
“I know (Robby) would want me to move on, get married, have the family I always wanted,” she says. “I told myself, only one of us died that day. It was a horrible thing, but I've still got to go on with my life.”
Asked what Robby would think of the woman who once needed to be pushed to jog two miles now running 26.2, she smiles, brushes back some of her long, dark hair and says, “He'd be like, 'That's my girl.' ”
Don Norcross: (619) 293-1803;
Posted by Bernabe at 9:54 AM